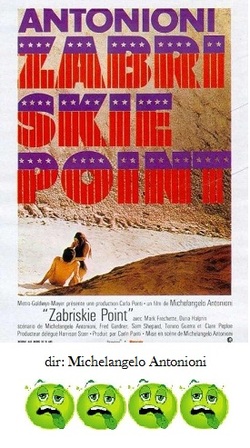 Even a great director can have a monumental lack of judgment.  Or it could be said that only a great director could flame out this spectacularly.  Michelangelo Antonioni had reinvented cinema in the late 60s with L'Avventura and Blow-Up, but Zabriskie Point was an annoying and pretentious flop.

Antonioni seemed to have his finger on the pulse of the youth movements in Europe and Britain, and after the international sensation of Blow-Up, he set his sights on doing the same thing with an American story.  The result was a film so self-important and pompous, audiences and critics could just shake their heads in bewilderment.

Zabriskie Point begins with a meeting of a student university protest group where all the members endlessly debate on how to proceed with a particular anti-war march.  All things are discussed: poor vs. rich, black vs. white, the 'man', the war, and everything in between.  It takes a while for the gears of the story to start grinding, but they finally do when, during the march itself, our hero, Mark Frechette, shoots and kills a police officer when the march devolves into chaos.  Frechette high-tails it out of Dodge, drives to an airport, steals a plane and flies away.  Ooookay.  The other main character is the daughter of a mega-wealthy land developer, played by Daria Halprin.  She, of course, doesn't dig Daddy's business, so she leaves and drives through the desert where she happens upon Frechette's parked plane.

It's at this point where Zabriskie Point seriously devolves into silliness.  Frechette and Halprin abandon their vehicles and begin a looooooong, slooooooooow trek through the desert.  They walk, they stop and lay under the shadow of a boulder, they recite the achingly lame, hippy-dippy dialogue, they have sex, they have visions of lots of hippies all having sex, they walk some more, and they talk some more.  Wander wander wander, talk talk talk.   Only the periods of nudity are able to rouse the viewer from his or her coma of boredom, and even then, it's not nearly enough.  Finally, they see the giant, modern mansion of Halprin's father... and then it blows up.  Not just once, though.  No, it blows up again and again and again from every possible angle known to man.  After that, we see refrigerators blow up, racks of clothes blow up, televisions blow up, pieces of furniture blow up...again and again and again.  The end.

What is this swill about?  I suppose it was meant to be a statement against the greed and materialism of American culture circa 1970.  Well, something was seriously lost in translation.  Zabriskie Point is just a pretentious and laughable slog through Vietnam War-era, hippie cliches that were already dated by the time of its release.  Antonioni would get back in stride later in his career, but Zabriskie Point was such a laughing stock that it took quite a while before he was taken seriously again.