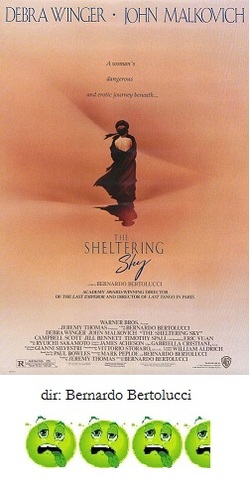 Rich people in the movies are depicted in two different ways. The first way portrays them as villains who must be defeated or turned away from corruption; the second sees them as aloof, shallow, and "needing something more". Either way, you learn to hate them. Bernardo Bertolucci's endless film The Sheltering Sky gives us a trio of rich people of the second kind.  Which makes this whole enterprise one tough slog.

Bored couple Kit and Port Moresby (Debra Winger and John Malkovich) have left America in search of adventures in North Africa with their travelling companion Tunner (Campbell Scott). The opening lines of the movie give us a discussion about the difference between tourists and travellers, and two hours plus later, it becomes evident that that is about as deep as The Sheltering Sky ever gets.

It's always a bad idea to try and adapt an existential novel to the screen. Novels like that are all about ideas, thoughts and the internal feelings of its characters, not about action. So what do you have on the screen? A bunch of people talking and thinking. And if that's all they are doing, they better be talking about something interesting. Not so here.

Anyway, Kit, Port and Tunner travel from destination to destination to destination. And talk and talk and talk, about nothing. Eventually Tunner leaves and goes home, then Port gets some deadly desert disease and dies (slowly). Kit has some sort of mini-breakdown and travels with a band of bedouins until Tunner eventually returns and finds her. But at the end, Kit disappears to roam the desert an eternal traveler once more. Oooooh....deep.

Except for the beautiful sand dune photography and the nice score from Ryuichi Sakamoto there really is nothing else to recommend The Sheltering Sky. The deadly slow pace and the ridiculously uneventful story are a real chore to have to sit through. Many times you will be yelling "who cares?" and "so what?" to the screen.

The performances by the three leads are also pretty uninspired, but then again when you are trying to portray boring people doing boring things, it's hard to invest much energy into it. All that Malkovich and Winger do of interest is to display their genitalia at various intervals as a way, I guess, to perk up the audience and to show how cool they are to be in an "art" film. They also show how cool they are to allow themselves to get all dusty, and at one point allow hordes of flies to crawl all over them. How brave.

What is The Sheltering Sky ultimately about? That if you are bored and you are rich, North Africa is just not the best place to go.  But I guess they already "did" Europe.