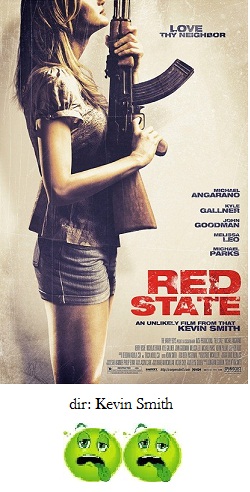 By now it seems pretty apparent that Kevin Smith has lost all of the good will he's been coasting on since the late 1990s.  With Red State, Smith took a potentionally brilliant premise and, for whatever reason, chucked it out the window.

Red State was promoted as a darkly satirical analysis on such repellent religious zealots like the Rev. Fred Phelps, casting them as murder-happy wingnuts.  Here was a great target, one to really go for the jugular, but the movie wimps out.

The plot involves three teenage boys who answer an online ad that promises sex with a hot to trot older woman, played by Melissa Leo.  But when the boys arrive, they are drugged and held hostage inside the nutty church of raving pastor Michael Parks, the congregation of which is only comprised of related family members.  After Parks murders a gay man that the group captured earlier, on the altar, the boys realize they are next.  Parks does a good job getting into the hateful, fundamentalist mindset that justifies extreme violence against those they believe go against their narrow interpretation of the Bible.  Unfortunately, it's all for nought.

What we expect and want to happen is for the boys to get free and then formulate some sort of juicy, satisfying revenge against the lunatics, but that doesn't happen.  Instead, the boys are just afterthoughts.  In keeping with the current trend of nihilism in so many movies, the boys all die in uneventful fashion.  Red State then becomes some sort of a play on the tragedies at Waco and Ruby Ridge with the FBI and ATF arriving to arrest the congregation on weapons charges.  Red State's finale is simply a very long and very tired gunfight that drones on endlessly towards a concluding event that gives new meaning to the term 'deus ex machina.'

It's all such a wasted opportunity.  Despite Kevin Smith's name on the credits, Red State barely got released and it's easy to see why:  There's just no rooting interest for the viewer.  There's just isn't a likable character in the whole thing.  We want the teenagers to get the upperhand only because their persecutors are more odious, but really, the three of them are pretty dim bulbs.  The villains get off far too easy and the law enforcement personnel are painted as ineffectual dunderheads.