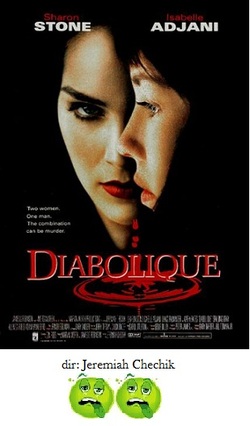 The new version of Diabolique is yet another example of a remake gone very, very wrong. On top of that, it's been said that star Sharon Stone went all diva on director Jeremiah Chechik to the point that he lost complete control over the film's focus. What is left is a director who desperately wanted to make a slick thriller, and a star who thought she was in a comedy, therebycausing a trainwreck of mood and atmosphere that makes for a rather odd film.

Set in a private boarding school for boys, Sharon Stone is a vampy teacher who likes to wear fire-engine red designer outfits and sunglasses in class (just like every teacher I've ever had). She doesn't seem to teach a whole lot so we'll just have to take that as a given. Anyway, Chazz Palminteri runs the school with his wife, Isabelle Adjani. You see, Palminteri and Stone are having a hot and heavy affair which isn't kept a very good secret from Adjani. Because the guy is such a scumbag, Nicole and Mia decide to kill him. After the deed is done and they dispose of the body in the school's murky swimming pool, they begin to suspect that they have been found out. This becomes more obvious when his body disappears from the pool. Did someone witness the murder? Is he really dead? Should the women even trust each other?

In the original 1955 version, the solution was completely left up in the air until the very last moment when the great surprise was revealed. In this version, Chechik gives away a key bit of info that really spoils any suspense this movie might have had (during the bathtub scene). And the ending is changed as well, so it didn't really matter that anything was given away. It's just an exercise in unfair audience manipulation and frustration.
Like the bad remake of The Vanishing, the original ending is disposed of in favor of a slasher finale where supposedly dead characters spring to life for shock effect, and one character winds up with a rake in the head.

Palmenteri is perfectly loathesome (he could do this kind of role in his sleep), Adjani's character is so pathetic you want to reach into the screen and slap her face and tell her to get a grip (she cries more than Demi Moore in Ghost if you can believe it), and finally there is Sharon Stone. Every line she utters has a sarcastic tone as if she were delivering one-liners, and her choices of outfits (particularly the hideous leopard print body suit) are distracting at best, painful at worst. Stone must have thought she were in a Basic Instinct spoof.

The best line occurs when Stone and Adjani have finished planning Palmenteri's murder, Adjani calls him up to invite him over to Stone's house. She breaks down after the phone call when Stone walks in, purses her lips and says "You know, I really need to take him off Speed Dial."  I didn't even mention the embarrased looking Kathy Bates as a police detective who makes jokes about her cancer and mastectomy. Her lines are truly painful to listen to.

Overall, I would say that Diabolique is a silly thriller that proves that studios should just leave well enough alone with the remakes. Just come up with an original idea, please.