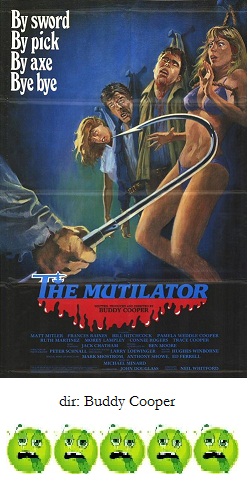 Known mainly for its extreme gore that was cut out from the original theatrical version when it originally premiered on home video, The Mutilator is exactly the sort of film that was responsible for the slasher film's demise in the 80s; low rent, no budget, barely written, poorly filmed and deadly dull.  The longer the slasher craze wore on, the more hacks came out of the woodwork with borrowed cameras, a few friends to fill the cast and several barrels of fake blood.

The prologue sequence in The Mutilator involves a young boy who accidentally kills his mother while he was cleaning his father's guns.  Jump to years later, and the boy, now a college student, decides to take a trip (for Fall Break!!) with his friends out to his father's beach house.  Sadly for this group, the father is now a raving maniac and dispatches the vacationers with gleeful abandon until it's father vs. son for the violent finale.

Granted, there have been better movies that have gotten by with even less compelling story ideas than this one.  But the biggest problems here is the pure lack of energy or interest in anyone involved (from the writer/director Buddy Cooper down to everyone in the cast and even most of the technical crew) to do anything beyond the barest minimum required to make The Mutilator into something that could be called a movie.  Only the makeup guys do anything of interest with the painful death scenes.  It's quite jarring to spend so much time with this lazy and stagnant production and to suddenly be bitch-slapped with some of the most over the top and out of step gore for its day.  One notorious moment involves the killer stabbing a woman between the legs with a gaff hook and then gutting her like a fish.

Some may consider this a point in the film's favor, but for me it was aggravating.  Aggravating and insulting that the film-makers had so little regard for their audience that they would create a film that was, basically, the equivalent of viewing a blank wall, or that slasher fans wouldn't mind as long as the body count was high enough.

Also, the original theme song over the opening credits ("Fall Break"!!!) is enough of a sin to make one want to turn the movie off right then and there.  Moving along, nothing more to see here.