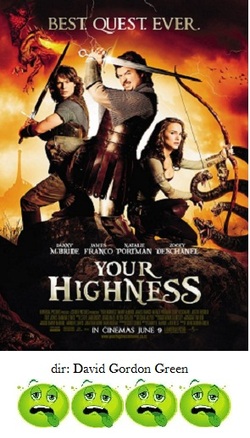 Your Highness is an attempt at a spoof of those sword and sorcery action epics, only it fails for one simple reason.  It's just not funny.  It doesn't work on a conceptual level; after all, those kinds of movies are sort of comedies in their own right.

The whole movie is wall to wall juvenalia and smutty stupidity.  Don't get me wrong, I can laugh at movies that wallow in bad taste, after all, I get a kick out of the teen sex comedy Sex Drive, the Ace Ventura movies and I'm one of the only people on Earth who had good things to say about the Jenny McCarthy debacle  Dirty Love.  But Your Highness doesn't even aim as high (or low) as those.

The basic plot involves two princes, the dashing and brave James Franco and the squat and vulgar Danny McBride, who also co-wrote the screenplay.  Franco's new bride (Zooey Deschanel) is kidnapped and it's up to these two bothers to go on a quest to bring her back from the clutches of evil wizard, Justin Theroux.  Along the way, they bring along a female warrior, Natalie Portman, to aid in their journey.  The cast is full of other talented people like Toby Jones, Charles Dance and Damian Lewis, but they are all at sea trying, and failing,  to generate laughs out of the murk.

A lot of money was poured into the elaborate costumes, sets and the myriad of CGI monsters, including a wizened old Yoda-like prophet that requests sexual favors from Franco and McBride in exchange for imformation.  There is exactly one laugh in the whole film.  It occurs right at the beginning involving a long noose and a short platform, but it's telegraphed so far in advance it comes as no surprise.

The director responsible for Your Highness is David Gordon Green, once a very respected indy film maker (Undertow, George Washington, Snow Angels) that somehow sold his soul to the Hollywood devils and has consigned himself to unwatchable, comedic dreck like Pineapple Express and The Sitter.  Here's hoping that someday he'll get back to what he does best and leave stuff like this to the Garry Marshalls of the film world.