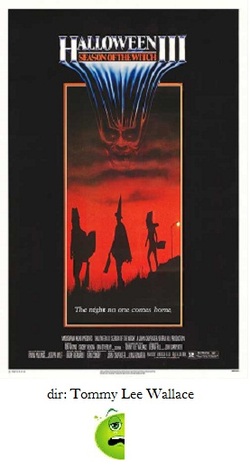 I only include Halloween III: Season of the Witch because soooo many people despise it.  Why?  Mainly it's because it has nothing to do with the other films in the series and does not include everybody's favorite slasher, Michael Myers.  But is it really that bad?  I firmly believe that if it were released without the Halloween moniker, the response would've been quite different.

A little bit of history is needed to put this film into perspective.  At the end of 1981's Halloween II, both Michael Myers and Dr. Loomis were dead.  Dead as can be.  That inferno in the hospital in the film's finale reduced Myers and Loomis to crispy cinders.  As far as John Carpenter and Debra Hill (creators of the first movie and writers of the second) were concerned, the story was done.  From this point, it was Carpenter's intention to create a whole series of new horror movies all based around the Halloween holiday; thus, Halloween III: Season of the Witch was made.  Needless to say, critics trashed it and die-hard Halloween fans were practically calling for blood.

The story begins when a man, seemingly delusional and clutching a Halloween mask, is admitted to the hospital claiming, "They're going to kill us all!"  Shortly thereafter, another man in a suit sneaks into his hospital room and murders him, and then, in the parking lot, sets himself on fire.  It's from this jumping-off point that we follow our two main characters played by Tom Atkins, as the on-duty physician when the murder occurred, and Stacey Nelkin, the daughter of the murdered man.  The trail leads them to the tiny town of Santa Mira (a shout-out to fans of the original Invasion of the Body Snatchers) where the factory is located that makes the brand of masks, Silver Shamrock, that the murdered man was clutching.  The villain this time is the founder of Silver Shamrock, Dan O'Herlihy, who plans to use the masks to massacre untold numbers of children.

The screenplay isn't without it's problems, though.  For one, it's never really clear why O'Herlihy wants to do this.  The motive is murky.  It has something to do with a Druidic or Paganistic rite that also involves harnessing the power from a recently missing boulder from Stonehenge.  Also, it's highly unlikely that a mask-making company could become the #1 seller in the country with only three different, but equally unremarkable, masks to choose from (a jack-o-lantern, a skeleton and a witch).  It also becomes a bad running joke whenever the highly annoying Silver Shamrock commercial is shown on TV (which is A LOT).

Halloween III: Season of the Witch is an interesting change of pace for horror fans.  It's well-acted and directed and has plenty of startling 'kills' for those who require them.  The best course of action is to just pretend the movie is called something else other than Halloween and accept the fact there is no Michael Myers here.  By doing that, you can enjoy the movie for what it is.  And truth be told, with the exception of Halloween 4: The Return of Michael Myers (and to a lesser extent, Rob Zombie's reimagining of the first Halloween), Halloween III is better than the other entries of the series combined.