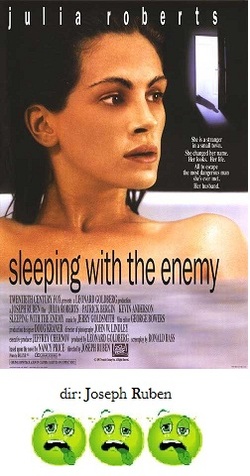 With the sole reason being that it stars Julia Roberts, Sleeping With the Enemy is about on par with any no-budget, woman-in-peril drama you'd find on Lifetime any day of the week.

No matter what movie she happens to be in, Roberts always exudes intelligence and likability; however, in Sleeping With the Enemy, she is reduced to being both ludicrously dumb and painfully whiny and dithering.

Roberts stars as the pretty trophy wife of Patrick Bergin, a wealthy control-freak and meanie who likes to slap Roberts around for failing to do such things as straightening the towels in the bathroom.  In order to get away from him, she manages to fake her own death by seeming to be lost at sea and high-tails it to a small little town to start life anew.  Now, in order to succeed at this ruse, Roberts, who supposedly can't swim, has been taking lessons in secret.  So, it would seem, she has really planned this all out, but she then does the moronic thing of throwing her wedding ring in their toilet for Bergin to find later and realize he's been duped.

Anyway, Roberts begins a flirtation with her new next-door neighbor Kevin Anderson.  We know this romance is sweet and proper because we are given such scenes as the montage of Roberts in a store trying on hats while Van Morrison's "Brown Eyed Girl" plays on the soundtrack.  Scenes like that are what we'd call a lazy screenwriter's crutch.

So, Bergin follows all of the clues she's thoughtlessly left behind, and in the grand finale, Roberts sees that, gasp!, all of cans in her kitchen cabinet are perfectly arranged and the bathroom towels have been straightened!  Then Bergin is killed in a standard thriller climax.  The word 'predictable' doesn't even begin to cover it.

Roberts's character here is truly dim.  Even though she fears that Bergin may find out she's still alive and come for her, she doesn't do anything to change her appearance, as if her trademark auburn locks wouldn't be noticed by, like, everyone.  The only time she takes any care to be incognito is when she dresses up as a man in order to go to a nursing home to visit her blind mother.  But lucky for her, Bergin is standing behind her at a drinking fountain and is sufficiently snowed.

For Julia Roberts, Sleeping With the Enemy was a big enough hit to keep her atop the list of major box-office stars of the day and would continue with a successful career; however, Bergin got pigeon-holed as a screen villain (he followed this with Love Crimes, an even worse woman-in-peril film starring dead weight Sean Young, before disappearing into obscurity).

Both by-the-numbers and dull in the extreme, Sleeping With the Enemy is disposable and pointless.  There are no surprises, no suspense and really no reason to waste precious time on something like this that you can get on cable whenever you want.