Anthropophagus (aka The Grim Reaper, The Beast) (1980) 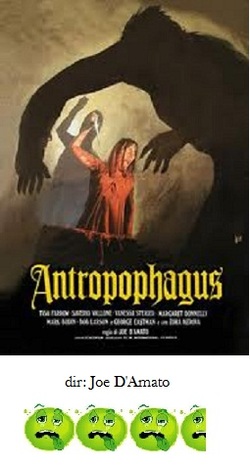 Here's a nasty little number from the age of 'Video Nasties', the moniker the British board of censors dubbed ultraviolent splatter movies from the early 1980s.  Anthropophagus (also known as The Grim Reaper, The Beast and many other titles) will certainly make you lose your lunch; however, unlike most movies of this ilk, it's not completely bereft of good qualities.

A group of yuppies are yachting in the Mediterranean when they come upon a particularly beautiful island, so they decide to dock there for the afternoon.  One oddity is the fact that the island looks as if people had lived there pretty recently, yet they can't seem to find anyone around.  That's usually a bad sign, and any normal person would take this fact as a reason to hightail it back to the yacht.  But of course they don't.

They then find three things: first is a bunch of rotting corpses, second is a female survivor who has spent a lot of time hiding from a murderous madman, and third is the murderous madman himself.  But he's not just any murderous madman.  You see, years earlier he was stranded in a lifeboat with his wife and child, and in order to survive he ate them.  After coming back to the island, he turned into a ravenous cannibal.

The rest of Anthropophagus has our yuppies running around the island for their lives, getting picked off by the cannibal in increasingly disgusting ways.  There are two of the most notorious moments in all of splatterdom featured here.  One scene has the madman reaching up into a pregnant woman's womb, yanking out the fetus, and then chowing down on it in front of her horrified husband.  The other scene is the finale where the madman's abdomen is cut open by the last survivor and his intestines begin spilling out, but before he dies he, I suppose, gets some hunger pangs and starts eating his own guts.

Alright, so what's good about Anthropophagus?  Well, director Joe D'Amato does a good job of establishing a sense of fear and an atmosphere of horrific dread in the earlier passages of the film.  The island itself is beautiful, and D'Amato is skilled in drenching it all with a great tone of menace.  That may not sound like much, but when it comes to flims like this, where the directors usually only care about how much blood and grue can be flung at the screen, the fact that time and care was put into the setting and photography, kudos are deserved.  The acting by the cast is serviceable, I guess, and George Eastman, as the madman, is pretty effective.

For fans of splatter films (you know who you are) Anthropophagus ranks a bit higher in quality than most.  At the very least, the cast and crew tried to bring something more to the table that just endless violence.  For everyone else, unless you've got a very strong stomach, you can safely bypass watching it entirely.