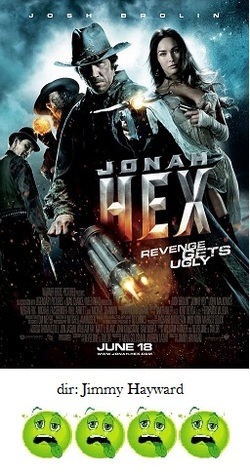 Based on a comic book series, Jonah Hex was an eagerly-awaited would-be summer blockbuster that, once it finally premiered, had audiences nationwide gagging and running for the exits.  It's true that the movie went through some serious post-production woes which tainted its word of mouth, but I can't imagine it was in any releasable shape at any stage of its creation.

Jonah Hex begins with a really nifty animated opening-credit sequence; and one should concentrate on that because the following scant 70 odd minutes of screentime will provide not an iota of pleasure.  What happened?  It's hard to say.  There are flashes here and there that show what Jonah Hex was probably intended to be, but whenever they happen they are quickly hammered into submission.

Josh Brolin stars as our title character, an Old West bounty hunter cowboy and former Union soldier with a scarred face and the strange ability to speak to the dead.  Essentially, the movie's plot surrounds Hex's battle of wills with the Confederate general, played by John Malkovich, who murdered his family and disfigured him.  Anyway, Malkovich has this supply of glowing energy balls (what they are and where they come from isn't satisfactorily explained) which he plans on using to topple the United States government.  This all sounds fairly simple, but believe me, the movie takes forever to set this plot into motion, and even then, the clunky screenplay and the choppy editing render it all incomprehensible.  Motives are murky, important plot points are casually forgotten, and characters seem to appear and disappear at random.  Oh yeah, Megan Fox is also in Jonah Hex, but who she really is or what her purpose is in the movie is a complete mystery; she just kinda pops up every once in awhile to, I dunno, pad the running time I guess?

Also adrift are Michael Fassbender, Michael Shannon, Will Arnett, and Wes Bentley, but like Megan Fox, they just seem to wander around without real purpose.  I have to believe that their parts were somehow much larger, purposeful and meaty, because I can't understand why any of them would've signed up to appear in so much nothing.  One of two things must have happened, either key scenes were never filmed, or that any semblence of lucidity was left on the editing-room floor.  Should we blame the director, Jimmy Hayward?  Was he bullied by the studios into cutting the movie down to shorter length in order to squeeze out as many daily screenings as possible?  Or did he deliver an original cut that was so dreadful that the studios had to take it out of his hands in order to save it?  We may never know.

Jonah Hex is just a waste of time, money and effort.  It's the kind of film that completely vanishes from the memory banks mere hours after watching it.  And, yes, that includes me (I had to sit and reeeeeeeeeeeeally concentrate to try and dredge up anything I remembered from when I sat through it, and I did not want to sit through it a second time).  No matter, now hardly anyone even remembers Jonah Hex, and that's the way it should be.