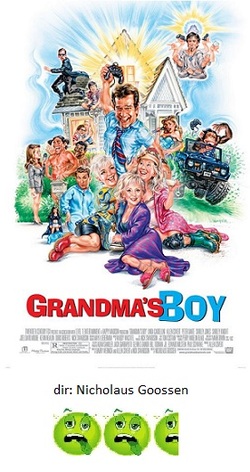 The stoner sex-comedy Grandma's Boy is an exercise in low-brow, brain-dead humor without a shred of dignity to be found anywhere.  That wouldn't be such a bad thing if the movie were actually...you know...funny.  It does have a moment or two here and there that will illicit a giggle, none of which can attributed to the slack leading man Allen Covert, but there just aren't enough of them.  The idiocy just outshines everything else.

Covert is our title character; he's a video game designer who is forced to move out of his apartment and go to live with his grandmother, Doris Roberts from TV's Everybody Loves Raymond, and her two elderly housemates, daft Shirley Knight and slutty cougar Shirley Jones.  As set ups go, you could do a lot worse.  Also on hand are the reliably brain-damaged Peter Dante, sex-starved Jonah Hill, and childlike Nick Swardson as his best buds, Linda Cardellini in the thankless love interest role, and the supremely annoying Joel David Moore as a rival video game developer who, for whatever reason, acts his entire performance in a grating and unfunny robot voice.

The plot, what there is of one, revolves around Covert developing a new, ground-breaking video game and Moore's many attempts to steal said game for himself.  But this thread is written in the most obvious, tv movie-level way possible.  It's simply a clothesline to drape all of the nudity and debauchery that fills the limp 94 minutes that feel easily twice as long.

Grandma's Boy is simply a bunch of disconnected scenes of parties, drunkenness, destruction, and foolishness.  Once in awhile a site gag actually works, but even those that do kind of wear out their welcome.  At one point, Hill suckles the nipple of a busty blonde and spends what seems like the next half hour of screen time still latched on it.  At first this is amusing, but it gets old the next half-dozen times we see it.  Dante does bring a laugh or two simply because he is such a flaming idiot you can't believe that anyone that stoned and stupid could possible keep from accidentally killing themselves.  The real problem is Covert himself...or maybe it's his character.  He's such a smarmy, unlikable clod that he turns any goodwill we might have for the movie into, at best, indifference, and at worst, revulsion.

So what about grandma and her friends?  They are mostly relegated to the background, only occasionally being trotted out to show us old ladies doing naughty, shocking things, an archetype pretty much pioneered by Betty White in the dreadful Lake Placid.  We get to watch them smoke pot and get high and do outrageous things, and we also get the deeply uncomfortable scene where Jones seduces and beds Swardson (he talks about her lady parts as smelling "like the Great Depression."  Ha.

As an Adam Sandler Happy Madison production, Grandma's Boy is at least better the vast majority of Sandler's own dismal oeuvre (it's certainly better than Happy Gilmore, The Waterboy, Grown Ups, Little Nicky, I Now Pronounce You Chuck and Larry, Click, or many, many others).  If you're seeking something mindless, Grandma's Boy certainly fits the bill, just don't expect appealing characters, ingenuity, originality, or, well, talent.﻿