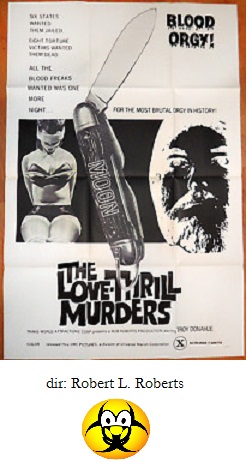 The Love-Thrill Murders (or under its alternate title, Sweet Savior) is a truly atrocious hippie-flick that tries to pass itself of as a sort-of Charles Manson- Helter Skelter wannabe, but boy does it suck. At times it comes across all serious and violent, but then it goes off the wall into deliriously bad comedy and even slapstick!

Troy Donahue (yes, Troy Donahue) stars as colorful cult leader Moon. At the beginning we are given a cult induction ceremony where a pretty young waif named Faith is laid on an altar, sprinkled with wine (or blood, who can tell?), and then Moon disrobes and has sex with her. Many of the other cult chicks talk rapturously about having "sex with God". Next are the credits with a ghastly theme song and images of Troy Donahue riding a hog throughout the city.

So, now the cult needs drugs. To get the stash from their connection (a pretzel vendor), Moon orders Faith and cult member Ruth, to take the guy to a room and have sex. This hilarious sequence is done with Ruth giving oral sex to the vendor, with Faith making funny faces, all the while would-be zany music is playing on the soundtrack. After the deed is done, Ruth spits out the, er, results.

The rest of the flick has Moon, Ruth, Faith and cult dude Bull, going over to an actress's house for a party of sex and debauchery. The hosts call the cultists freaks, the cultists call them pigs and beasts, but they all decide to have sex together anyway. A blonde female party guest has a lengthy lesbian sex scene with Faith, Ruth does it with a swinging couple, and Bull gets stuck with Fritzi, an offensively effiminate gay guy. Their scene is quite riotous: Fritzi shows up in the bedroom with wig, heels and lingerie much to Bull's chagrin, but Fritzi claims he really is a woman but had a penis transplant from a Danish sailor. Naturally Bull believes it.

The grand finale has Moon ordering the butchering of the party guests. The blonde gets a meat fork in the stomach, the swinging couple is offed with the woman being laid on the dining room table and stabbed and the man's throat is slit. Fritzi is stabbed in the basement, and our hostess is chased through the house (topless of course) until Faith stabs her in the indoor swimming pool.  After the deed, the hippies are stopped by a cop, but, never fear, they are let go with a warning. That's all. The end credits are exactly like the beginning, Troy Donahue again rides his cycle, hippie-hair whipping behind him, until he stops and gives the finger to a skyscraper.

There's nothing salvageable here. The acting is abyssmal, the cheap sets rival those of Ed Wood movies (there seems to be exactly two.  I think they use the same bedroom set for everything and just change the decor slightly), wretched musical numbers (apart from two performances of the theme song, there are other hippie performances like "Damn Damn the Modern Man"), and really tasteless Charles Manson-Sharon Tate references. Oh, and there are lots of ugly, naked, hippie girls.  If that's your thing, have at it.