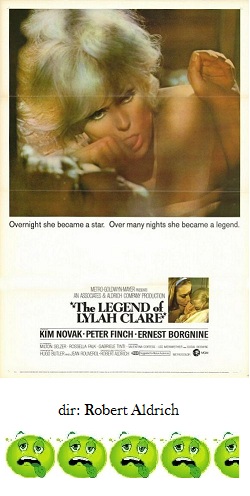 Who was Lylah Clare?  Well, apparently she was a huge movie star who died a tragic and mysterious death, and now her former lover and guru, a vicious director, wants to make a movie of her life and death.  Unfortunately for us, the film The Legend of Lylah Clare is just as goofy and lousy as the movie within it.  Confused yet?

Kim Novak plays the double role of the deceased Lylah and the young lookalike, Elsa Campbell, who is hired by director Peter Finch to star in the biographical film.  And after the (very) long 130 minutes of The Legend of Lylah Clare is finally over, we are no closer to understanding what the heck supposedly happened.  Novak-as-Lylah apparently died by tumbling over a staircase because of her acute vertigo, but the simple idea of adding a handrail to prevent such pointless tragedy never seemed to occur to anybody.  There’s also a lot of sturm and drang about whether Novak-as-Lylah’s secret, murdered lover was a man or a woman…but I digress…

What is very easy to say, however, is how this plot will develop.  After all, since the movie within the movie should end with Novak-as-Lylah’s death, we just wait for Novak-as-Elsa-playing-Lylah to also plummet to her death.  History should repeat itself; however, what we couldn’t predict is that Finch should decide that his movie should end not with a fall from the stairs but a fall from a trapeze during a circus act (!).  So, Novak-as-Elsa-playing-Lylah actually dies for real after falling from the trapeze and Finch premiers his ‘Lylah’ movie to an adoring crowd even though he now feels sorry for contributing to her death.  The confusing final moments show Rossella Falk (as Finch’s lesbian companion who was also in love with Lylah) watching the premier on TV and getting a gun (to kill Finch? Herself?) and then suddenly we are presented with a commercial for Barkwell Dog Food and then the credits roll.

The Legend of Lylah Clare is a very odd movie indeed.  I suppose director Robert Aldrich (a far cry from Hush…Hush Sweet Charlotte) was trying to make a serious romantic thriller, but most of it plays for camp.  All of the acting by the distinguished cast is campily overwrought; we get Novak’s hysterically bad accent, Finch’s screaming, and Ernest Borgnine, as the ‘Lylah’ movie’s financier, swallowing the scenery.  Once in awhile a scene works, such as Novak-as-Elsa tearing down gossip columnist Coral Browne at her coming out party but mostly they don’t (for a movie about the movie industry, the movie is pretty clichéd).

Aldrich certainly dropped the ball with The Legend of Lylah Clare.  Whatever his intentions were, the movie is a confused, mangled mess with no thrills, brains or wit.  The comedy is unintentional and the romance is cold.  It’s not a good time at the movies.