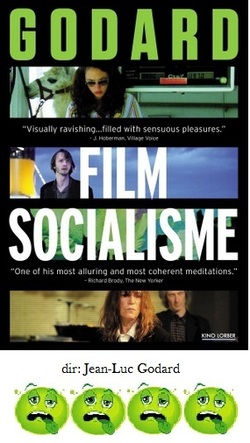 Even the masters have their off days, and with Film Socialisme, Jean-Luc Godard has seriously lost his mind.  With his landmark films Breathless, Alphaville and Masculin Feminin, Godard was one of the pioneers of the French New Wave in the 1960s, now though, he's trying far too hard to appear 'hip'.

What, exactly, is Film Socialisme?  Good question.  Unfortunately, I have no answer.  Let's paint a picture, shall we?  Imagine, if you will, that you are having a particularly uncomfortable family reunion aboard a Mediterranean cruise.  To document the trip, there are two digital video cameras; one of the cameras is given to an obnoxious, know-it-all cousin whom no one likes, and the other is given to your perpetually drunk Great Aunt Matilda.  Much filming ensues.  After the trip is over, the footage from both cameras is given to a paranoid schizophrenic with dyslexia to edit.  The result might look something like this.

Film Socialisme is a pretentious and incoherent rambling of random shots of people on a cruise interspersed with subtitles and title cards that may as well have been written through choosing words from various dictionaries (English, French, etc.) while blindfolded.

What does it all mean?  Nothing, I suspect.  Truly, it's like some kind of practical joke.  I can see Godard, sitting in his kitchen reading the reviews by several critics who tripped over themselves to espouse the film's brilliant subtext, masterful style, and all of the other B.S. a lot of critics write when they don't understand a film and there is nothing else to write about.  And I see Godard laughing his ass off, shaking his head in exasperation that so many of them totally fell for it.

Despite the great man behind the camera and the arty trappings, Film Socialisme has no more worth than the countless pieces of direct-to-DVD junk that clog up the shelves of your local Wal-Mart.