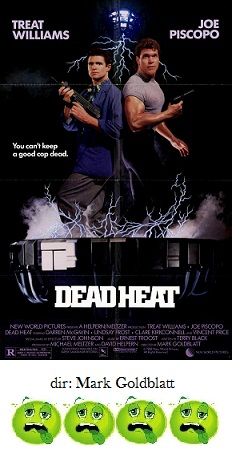 What genre does Dead Heat really belong to?  It's hard to say.  It tries to be so many different things that it ends up mired in a confusion of tones that render it both overstuffed and undercooked.

Treat Williams and a badly-mulleted Joe Piscopo are your cliched detective partners; you know, Williams is the strait-laced type and Piscopo is your typical vulgarian.  Anyway, the movie begins with a jewel store robbery, and even though Williams, Piscopo and about fifty other cops unload a barrage of bullets at the thugs, they seem to be quite hard to kill.  Come to find out, these guys have already been killed once before.

The clues quickly lead to a chemical manufacturer where they find a lab which contains a device that resurrects the dead (the absurdly easy way in which our heroes find out this deep, powerful secret is the first of a great many logical errors throughout).  During the melee, Williams is killed in the 'Asphyxiation Room' and his sometime girlfriend/coroner brings him back to life, but there is one catch: he will decompose in about 12 hours.  Oh yeah, Williams's character's name?  Roger Mortis.  ha ha.

This all may have worked if only the screenplay would firmly establish some rules about the undeadness of those reanimated.  It's never clear how or why this has to happen.  Undead henchman show up all over the place to 'kill' Williams, but they always use guns which we've already established do not work.  How do you kill the already dead?  No idea.  Sometimes electricity works, sometimes not, sometimes enough bullets work, sometimes not.  Cut off the head?  Sometimes this works, too, other times the head stays living or the headless torso does.  Basically, anything can happen as necessitated by the plot.

Another issue is the established time constraints of the story.  We know how long Williams has before he's cadaver soup, but the script keeps changing things around.  The worst instance of this is near the finale when Williams (half-decomposed already) is captured by the villains, pathologist Darren McGavin along with the wealthy inventor of the machine, Vincent Price.  Instead of just disposing of Williams, McGavin naturally just handcuffs him inside a parked ambulance because Williams will "be dead in 45 minutes."  In this 45 minutes, he rigs the ambulance, causes a massive traffic accident, escapes from the body bag the EMTs put him in, steals a motorcycle, drives to the chemical company, survives massive shootouts with undead guards, kills McGavin and Price, resurrects Piscopo (who was killed earlier in the film) and with time to spare, he and Piscopo trade some tired quips and leave the scene before the credits roll, oblivious to the fact that they'll both be decomposed mush very soon.  Oh well.

Some of the make-up effects are pretty cool, but that's about the only positive things that can be said for the movie.  Dead Heat wants to be a zombie flick, a cop buddy movie, a black comedy, an action thriller, and a science-fiction story, but it fails as all of these.  It wants to be all things to all people but winds up being nothing for nobody.