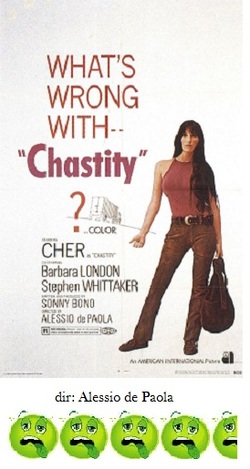 When Cher accepted her Best Actress Oscar for 1987's Moonstruck, she thanked Meryl Streep for helping her with her first film.  She was referencing Silkwood from 1983, very conveniently neglecting the two movies she did before it.  One, Robert Altman's 1982 film Come Back to the Five and Dime, Jimmy Dean Jimmy Dean, was a good movie and she was good in it; the other, Chastity from 1969, was an embarrassment, and the less Cher said about it, the better.

Chastity is a plotless, pointless and laughable attempt by Cher and hubby Sonny Bono (who wrote the dismal screenplay) to make a 'hip' and 'groovy' road movie for the flower power set.  Needless to say, it flopped, not appealing to anyone except those who want to see how far Cher has come in regards to acting.  If anyone else gave a performance as godawful as Cher gave here, it's highly doubtful they'd ever purposefully put themselves in front of a camera again.

Cher stars as Chastity, a teenage (?!) runaway who traverses the country, bumming rides with strange men, looking to 'find herself', or something to that affect.  It would be all fine if any of the characters said anything of interest.  But they don't.  Compound that with Cher's annoying habit of always talking to herself every few minutes with such deep insights as, "Well, Chas, you've done it again.  What are you gonna do now?"

She shares motel rooms with the guys she rides with, but she never has sex, of course.  Eventually, she winds up in the apartment of a nice guy who she seems to like, although it's hard to tell since through the entire movie Cher uses exactly the one, blank expression.  But, she's a rambling rose, see, and can't be tied down, so she keeps on the move, eventually being hired at a brothel.  Unfortunately, she's not very good at this job (since she won't put out) and leaves yet again.  When, oh when, will Chastity ever find happiness?

Chastity is a really tough movie to sit through.  Everything about it is cheap, tacky and amateurish.  It's no wonder Cher neglects to include it on her resume; it's probably one of, if not the, worst film ever to feature a future Best Actress winner.  You can't help wonder if this movie may have been part of the reason Sonny and Cher's daughter, Chastity (now Chaz) Bono, went through with the whole gender identity change...probably not, but it's worth considering.