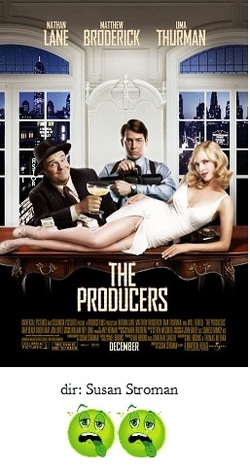 Here is the film version of the musical The Producers.  It won a bevy of Tony Awards for its Broadway production, and the movie not only stars the mega-talents from the stage, Matthew Broderick and Nathan Lane, but it is also directed by Susan Stroman, the woman behind the successful stage production.  With all the same elements in place, why does this movie flop?

The plot of this incarnation of The Producers is the same as the plot in Mel Brooks's immortal 1968 original film.  We have a couple of Broadway producers who discover they can defraud investors and make a killing by purposefully putting on a show that is so awful and offensive that it bombs.  That show, "Springtime for Hitler," becomes a surprise smash which sends the producers to their ruin.

It becomes pretty clear, from the very opening scene, why this film translation is just all wrong.  It seems that Stroman had no real idea about what makes a successful film and therefore falls back into her comfort zone of directing for the stage.  Everything is pitched at such a high level of overacted zeal.  Both Lane and Broderick deliver all of their lines as if they want to make sure they could be heard in the back balcony.  It's all high-strung mugging, bellowing, eye-bugging, and completely outsized body movements that threaten to bring down the scenery around them.  It's just...so....shrill.  Not helping matters are the miscast roles filled by Uma Thurman and Will Ferrell that also grate on the nerves.

As far as the songs go, all I can say is that none of them really stick with you.  Those that are already fans of the music because of the Broadway show will be the only ones humming them afterwards.  Stroman tries to open up the song numbers for the screen but they all still feel curiously constrained, as if she felt doing so would somehow destroy their integrity or something.

The Producers should've been the big awards magnet the studio and everyone else was expecting, but instead of reimagining the material like Chicago was able to do, it came across as creaky and old-fashioned.  It's kind of like trying to cook your favorite recipe in a kitchen at a high altitude; sure, all of the proper ingredients are in place, but unless you understand the change in chemistry and environment, you'll end up with something less than appetizing.