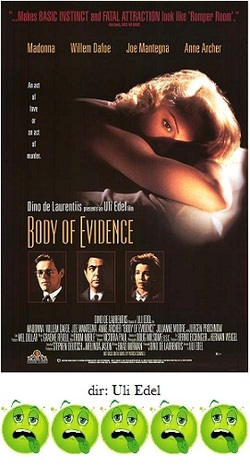 Body of Evidence represents Madonna's most blatant attempt to be taken seriously as a cinema sex symbol, coming hot on the heels of Basic Instinct a year prior.  If Sharon Stone can become a top box-office draw from crossing her legs in that film, Madonna could certainly do the same by upping the ante.  No dice.

This is an assembly-line murder mystery where Madonna is accused of murdering her much older and wealthier lover.  The man died from a combination of drugs and hardcore sex with Madonna, therefore her irresistible sex appeal is the murder weapon.  She's just that hot.  Willem Dafoe plays the lawyer set to defend her in court and, of course, he becomes ensnared in her web of seduction.  Is she really guilty, or is this a case of a super-hot woman being unfairly persecuted?  Don't hate her because she's beautiful...

Nothing about Body of Evidence works.  It fails as a mystery; after all, Madonna's guilt or innocence is beside the point, but you won't win any prizes for predicting which.  The courtroom scenes are so awkwardly written and staged that whatever the jury's conclusion may have been, there are immense grounds for, if not an outright mistrial, at least a very sturdy appeal.  Neither Dafoe, nor Joe Mantegna (the prosecutor) nor the judge act like any lawyer or judge you've ever heard of.  As far as the case itself goes, there's no evidence, circumstantial or otherwise, ever presented, only a parade of so-called 'witnesses' that include Anne Archer and Jurgen Prochnow who only serve as convenient but unconvincing red herrings.

But no one is going to see Body of Evidence for the mystery aspects, anyway.  They're watching for the sex.  So, how about those kinky sex scenes?  Unfortunately, these scenes aren't a turn-on.  Body of Evidence tries to outdo Basic Instinct by ratcheting up the kink factor to such a degree that it falls apart into sniggering ludicrousness.  We get such non-erotic scenes like Madonna tying Dafoe up and then alternately dripping hot candle wax and cold champagne over his nether-regions or a sex scene in a parking garage where Madonna breaks a lightbulb, raining broken class on top of the hood of a car, and then they roll around and furiously hump away on top of the shards.

Madonna's performance here is just weird.  In order to seem coolly seductive, she reads all of her lines in this flat, deadening monotone.  Even when uttering the outrageous, sexual dialogue, she sounds as if she were just reading the ingredients on the side of a cereal box.  However, she is given a priceless line at the end of the movie which pretty much sums it all up, "I f*ck.  That's what I do."  Willem Dafoe tries to bring some realism to the proceedings, but he is defeated by it all.

Laughable, ludicrous and just plain wrong-headed, Body of Evidence can be used as a case study for future directors on how not to make a thriller.