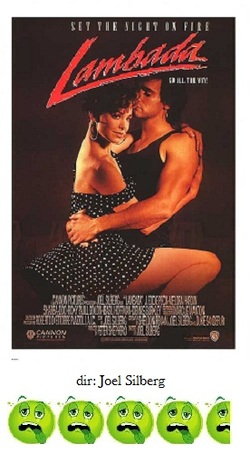 After the brief Dirty Dancing fad wore off, another even sillier incarnation became a trend.  Lambada (aka The Forbidden Dance) was essentially just dirty dancing for the Latino crowd.  The craze spun off two dismal films: the cheap-looking The Forbidden Dance and the bewildering Lambada.

Why bewildering?  Well, here's a movie that's named after the pelvic-grinding lambada, but there's very little actual lambada-ing in it and the advertised, and highly inappropriate, romantic storyline doesn't happen, so anyone looking for even a modicum of eroticism or heat are going to very disappointing.  So, what's the real plot here?  It's about a high school math teacher who successfully instills the love of trigonometry in his students.  Yes, really.  It's Stand and Deliver, only with more thrusting crotches.

Our main character here is J. Eddie Peck, math teacher by day and lambada dancer by night.  You see, even though he teaches at an uppity private school he has to get back to his Latino roots by donning on a leather jacket and dancing at a club on the wrong side of town.  Melora Hardin is one of Peck's students, who accidentally wanders into said club and sees her teacher in the throws of lambada.  Hardin gets seriously hot for teacher, and tries all she can to get into his pants, but no dice.  Peck is an upstanding husband and father, and even though Hardin looks about 10 years too old to still be in high school (as most of the 'students' seem to be), he rejects her advances.  Peck does get in trouble with the school when one night he buses a group of young Hispanic lambada fans to his classroom so he can....gasp....tutor them!  The horror.  Anyway, a fight breaks out between the rich kids and the young lambadaers and Peck is fired.  Which leads us to the expected grand finale in any musical or dance movie: a trigonometry bee!  Who wins?  Does it matter?

But at least if there is any need for you to make a challenging billiard shot using only a protractor, you'd know how.