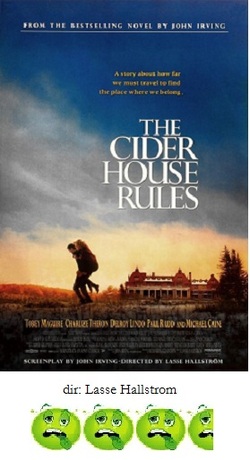 It's hard to figure out what Academy voters saw in The Cider House Rules. Usually there is one movie that is nominated for just being an overly-sincere crowd pleaser. These movies aren't great, but at least you can see how they captured voters hearts and won. The Cider House Rules is just a big, lifeless thing. I didn't like it, I didn't despise it; in fact, I felt absolutely nothing about it. It is a celluloid dead zone.

It surely had to be difficult to pack a movie with sad orphans, abortion, incest, drug abuse, forbidden love, murder, WWII and the deaths of children and still garner no audience reaction. The Cider House Rules does just that, and does it quite completely.

Set in an orphanage in Maine in the 30s and 40s, we follow one orphan, Homer Wells. Wells, played by Tobey Maguire (Pleasantville, The Ice Storm) has grown to adulthood and is now being prepped to be a doctor just like the head of the orphanage, played by Michael Caine. Now a word about the performances of Maguire and Caine. I have been a fan of Maguire's, but it is increasingly clear that his acting range is extremely limited, or else his choices of characters to play are always so bland and disaffected, or else Maguire's habit of consistently under-playing everything is the problem. We are asked to follow this character through his life and struggles and care about it; however, since Maguire's Homer Wells doesn't really seem to be affected by much of what is going on around him, it then becomes a chore to get excited ourselves.

Michael Caine won an Oscar for this performance, and it is a real mystery why. It's not that it's a bad performance on an emotional or plot level per se, but his attempt at a New England accent is truly atrocious. Every time he opened his mouth and spoke, I wanted to cringe or have a stern talking to to his voice coach who let him embarrass himself like that. How could he win an Oscar when his simple technique is so wretched? I guess the appearance of Caine's character laying in a hospital bed huffing ether would cause some to exclaim "How brave." I think it's just another case of the Academy going "You're old and we like you. Here's an Oscar."

Some of the film's supporters espouse on the hard-hitting look at abortion that the film takes. That it has a brave pro-choice stance. But actually the abortion issue is briefly touched upon but is never really explored. It's really just an issue used as a cheap plot device. Caine performs abortions along with aiding births; however, Maguire finds the abortions to be wrong. End of debate. Then a young lass is brought in by her soldier boyfriend for an abortion. She is played by Charlize Theron. Somehow though, she is supposed to light a fire in Maguire's heart. Despite some brief humping in the woods later on in the film, it's never really clear what they see in each other. Theron looks at Maguire as if she were babysitting her nephew, and Maguire looks at Theron like....well, like he looks at everything else in this movie; unimpressed. Anyway, after the abortion, Maguire convinces Theron and the soldier to take him along with them; so after about, oh, 3 seconds, they take this goofy stranger back to their apple orchard on the coast.

At the orchard, Maguire decides that maybe his life's dream is to pick apples. So he works along with a group of black migrant workers to pick the apples and learn the secret of great cider. Some of the many workers are played by Delroy Lindo, Erykah Badu and Heavy D. But except for Lindo and Badu, their characters barely have names let alone dimensions.

All goes well with the dull relationship of Maguire and Theron, and then suddenly we get the totally unnecessary subplot of Badu finding out she's pregnant by her father, Lindo. Maguire decides to perform an abortion against his better nature. Afterwards, Badu stabs Lindo and he dies, but not before one of the most agonizingly overwrought death bed scenes in recent memory. It goes on forever and everyone, including Maguire, tears up during his farewell speech. Had they forgotten the guy raped his daughter? I guess so.

While all of this is going on (but not quickly), Caine tries to finagle a way for Maguire to come back to the orphanage as an accredited physician by using a forged diploma; but like almost every other story thread, this one is brought up and then left unresolved.  How does this all end you ask? Well let me see. Theron's soldier boyfriend comes back from the war a paraplegic, so she spurns Maguire. An asthmatic orphan, who pops up throughout the movie just so the audience can fall in love with the little brat, croaks. This is followed by the death of Caine, who overdoses on ether. Maguire gets the news and comes back to take over the orphanage. It is his destiny you see.

This movie is a tough slog. Yes, all of this misery happens in The Cider House Rules, but Maguire, along with just about everyone else in the cast, shrugs it all off and presses on with their lives. Screenwriter John Irving, adapting his own lengthy novel, obviously had to pare down the story, and it seems he wanted to keep all of the major "high points", overdoses, abortions, murders etc., but had to trim away everything else. So, all of this happens, but there is no build up, and no resolution. It just sits there.

Yes, this movie almost beat out American Beauty for the Best Picture Oscar, because a lot of the older Academy members didn't like a movie with adultery, pot-smoking, illicit sex, and murder like American Beauty. They obviously preferred their rape, ether addiction, incest, and murder wrapped up in "nicer" package.

It's a movie with all of the life sucked right out of it.