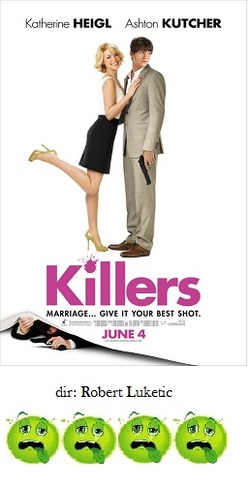 Predictable, annoying  and dim are three good descriptions of the tiresome adventure-comedy Killers, a movie that is so insanely dull and by-the-numbers that I can't imagine what audience it was made for.  The only people who could possibly find anything enjoyable in it at all have to be those who've never seen a movie before.

Killers stars Ashton Kutcher as an international assassin and spy (stop laughing!), and if you can get past that bit of disastrously unconvincing casting, then you've won more than half the battle.  Yeah so, Kutcher is a killer for hire who goes into retirement after meeting, romancing and then marrying ditzy Katherine Heigl, but of course there's a price on Kutcher's head and he can't keep his former secret life a secret any longer.  Zany hijinks ensue.

For the film's first 1/3, we are subjected to the vapid non-chemistry between these two airheads and for the remainder we watch as Kutcher and Heigl become involved in an endless barage of car chases, shoot-outs, and fist fights where, surprise!, every single person in their life ends up being a spy or a killer of some sort or another.  After about the fourth or fifth of their neighbors in the suburbs ends up pulling out a gun threatening to ice Kutcher, the intended big plot twists devolve into tedious repetition.

As unconvincing as Kutcher is in this role, at least he tries to embody the physicality of an international assassin, but anything would look good next to Heigl's endless shrieking and dithering around in what is fast becoming her signature acting-style.  More movies like Killers (and The Ugly Truth and New Year's Eve and 27 Dresses) and she'll be tossed onto the career compost heap alongside other romantic-comedy casualties like Jennifer Lopez and Kate Hudson, and by the looks of things, Jennifer Aniston and Sarah Jessica Parker will be joining her.  Really, I have to wonder, do these actresses really believe that these movies they are grinding out are any good?  What about movies like Killers, The Ugly Truth, Love Happens, Maid in Manhattan, I Don't Know How She Does It, Did You Hear About the Morgans?, The Bounty Hunter and Raising Helen, amongst countless others, were appealing to them?  A fat paycheck is the only logical explanation.

Do yourself a favor and skip Killers.  It's not just a waste of time and money due to its wretchedness, but it's a waste of time and money because once you've seen the trailer, you've already seen the movie.  Everything that happens, every plot point, every joke, every stunt, and every line of dialogue is already known to you.  You've seen it countless times already.