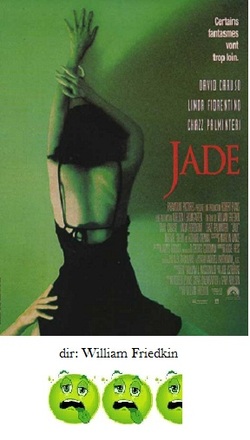 How does Joe Eszterhas keep getting his screenplays filmed? He has a repertoire of exactly one idea; he just kind of jiggles around the details and "boom" another hit. But in the case of Jade and especially Showgirls from the same year, it was more of a case of carrer suicide.

I'm getting off the subject, oh, hey, this was directed by William Friedkin! Isn't he that has-been who once won an Oscar for The French Connection? The same guy who directed The Exorcist?, I wondered what he'd been doing lately. Oh yeah, he did do Cruising, where Al Pacino goes undercover in the gay, S&M underworld, oh, and he also did The Guardian with a infant-snatching, druid baby-sitter. No wonder he hasn't been getting much work.

Anyway, Jade is the story of a rich art dealer who is hacked to death with a ceremonial hatchet. Who might the killer be? A silver box of pubic hair (no kidding) leads DA David Corelli (Caruso) on the trail of a mysterious slut named Jade. His investigation also leads him to the corrupt mayor of San Francisco (Richard Crenna) who has a penchant for loose gals. All of this leads to his good friends Trina and Matt Gavin (Fiorentino and Chazz Palmenteri). Caruso, of course, has the energy and charisma of a roof shingle, and Palmenteri is, of course, way over the top with oily sleaze. But it's Fiorentino who is found out to be Jade and her character is really treated poorly in this film. Why did she ever agree to it? Why did she allow scenes of her being screwed with a stocking over her head? Or have her character talked about like she is? One fellow hooker talks about how she wouldn't "go that route (wink wink)" but "Jade would, she'd take it any way she could get it, she couldn't get enough of it". Sordid.  So who killed the art dealer? Was it Jade? Well, I'd tell you, but that would spoil the worst cop out ending in some time. It doesn't matter if you follow the clues, you will be wrong, because nothing makes any sense.

Joe Eszterhas probably whipped this screenplay out in a matter of hours. It culls all of the worst elements from his other works like Jagged Edge, Sliver , Basic Instinct and Showgirls and stews it up with an air of exotic respectability. No dice, Joe. It's still the same nauseating, mysoginistic swill that we're used to seeing from you.

Friedkin's direction is best described as anemic. A car chase through the San Francisco streets is stopped dead in its tracks during a Chinese New Year celebration. The cars slow to a crawl for an ungodly 11 minutes. Wow, excitement.
Thankfully Jade and Showgirls fell and exploded so hard that Eszterhas was relegated to being a trivia question.