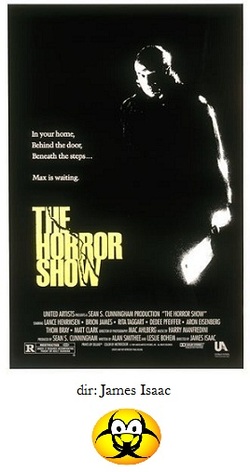 Well, The Horror Show is definitely a horror, but not, I'm sure, in the way it was intended. It's a movie that's only tolerable while watching in fast-forward mode, but hey, desperate films call for desperate measures.

J    ust watching the opening credits instilled me with a sense of dread. Let's see, "produced by Sean S. Cunningham", that's the guy who created the Friday the 13th series, bad sign number one. Hmmm, "written by Leslie Bohem and Alan Smithee", bad sign number two. Bohem was the "creative" mind behind such splendidly written films like Dante's Peak, Nowhere to Run, and Daylight, and Alan Smithee is the pseudonym used by someone so embarrassed by their work they didn't even want credit for it (in this case, Allyn Warner). And "directed by James Isaac".  The Horror Show was the only film he directed and he was also a special effects supervisor for Deep Star Six, ah, bad sign number three.  Also, the original director David Blyth, was fired.  So, it seems, this entire production was mired in chaos, and it shows.

The Horror Show is a truly godawful horror flick about "Cleaver Killer" Max Jenke (Brion James) who, after he is captured by cop Lucas McCarthy (Lance Henriksen) and executed, comes back as a ghost to get revenge on McCarthy and quote "tear your world apart". Sounds promising enough; however, the film has no idea how to build scares and relies on False Alarms and bad hallucinations to achieve an effect.

You know the False Alarm. Intended victim walks around until something (that's not the killer)  jumps at, falls on, or scares the bejesus out of them. One time can cause a jolt, twice and you're trying to develop mood, three times is pushing it, but The Horror Show has soooooo many False Alarms. In fact, it's just one big False Alarm.

Anyway, back to the plot. Jenke's ghost inhabits the McCarthy's furnace down in the basement. The mother looks for the cat and goes down to the basement and is scared by a falling saw after saying "kitty kitty kitty" about a thousand times. Later, the daughter goes downstairs looking for her boyfriend saying "Vinny Vinny Vinny" about a thousand times. Vinny looks for the daughter and is chopped up by Jenke. Later Lucas goes downstairs looking for Jenke saying "Jenke Jenke Jenke" (just kidding). Later, the daughter and the son walk around the house looking for Vinny going "Vinny Vinny Vinny, come on out Vinny". Oh, and Lucas begins to hallucinate that Jenke has turned into the turkey that's on the dinner table, and then "sees" his daughter trying to give birth to Jenke's love child. And I don't want to forget scenes with decapitated heads lying on dinner plates with "Blue Plate Special" written in blood next to them. Ha Ha.  Everything culminates with a showdown in a warehouse where Jenke is impaled onto a fusebox. The electricity is the key, get it?

Funniest moment: McCarthy's partner is found in the warehouse in the beginning of the film, swinging from a chain with his arms cut off and just before he dies he half says, half squeals "I did the best I could".

Truly vapid in every way possible. The Horror Show is devoid of anything resembling talent in every department. It's a wonder Alan Smithee didn't write, produce, direct and star in it all by himself.