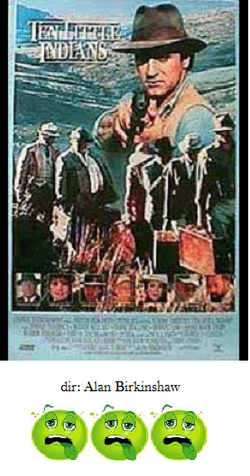 No matter what your literary pedigree might be, if your movie’s big star happens to be Frank Stallone, the younger and much less talented brother of Sylvester, then you have a serious problem from which you can never recover.  Yes, Ten Little Indians is the umpteenth filmed version of Agatha Christie’s famed novel and play, and, yes, Frank Stallone is the romantic lead, but, to be fair, there are many other problems.

The story of Ten Little Indians should be familiar: a group of ten strangers all arrive at a remote locale by invitation from their unknown and unseen host, Mr. Owen.  All ten are accused of murder themselves and are soon picked off one by one, all in the methods presented by the creepy children’s poem, “Ten Little Indians.”  The killer is one of the ten, but who is it?  And as great a story as this is, it just can’t survive this latest and lamest production.

To be effective, the setting must be someplace that is both remote and expansive, after all, the victims should be cut off, unable to escape, and there should be plenty of room for the killer to move about undetected.  Earlier incarnations were set on islands, remote mountain estates, and, in the 1974 version, a giant palace in the middle of the Iranian desert.  This 1989 version takes place in a small campsite in the African wilderness, and therein lays the problem.  All the characters inhabit small tents that placed far too close together.  How in the world is anyone going to remain undetected?  Any tension is leeched out by the fact that we can’t understand how they are able to get killed without being seen by, like, everyone.  In fact, characters seem to die and their bodies seem to appear within inches of the others without being seen.  At first this is an annoyance, but it quickly becomes unintentionally funny.

The script by Jackson Hunsicker and Gerry O’Hara is also an issue.  There’s a reason this story has been produced so many times: it’s a classic on its own.  It’s important that we know the poem ‘Ten Little Indians,’ otherwise the victims’ demises and the clues to who the killer might be are impossible to anticipate or interpret.  The poem is treated as an unimportant throwaway.  We are also supposed to get some insight into the characters based on the stories behind the murders they are accused of; but many of these too are frustratingly absent or needlessly changed (the story Brenda Vaccaro comes up with about her lesbian lover is a howlingly bad addition).  Vaccaro also gets the funniest line of dialogue when speaking about the murder of Neil McCarthy: as they bury his body she gravely intones, “We didn’t even get to know his first name,” even though his first name was given a mere five minutes earlier.

Last, and most certainly least, we come to the cast.  No one in Ten Little Indians comes off very well.  The performances range from hammy (Donald Pleasance, Brenda Vaccaro, Herbert Lom), to bizarre (Paul L. Smith, Moira Lister), to affected (Sarah Maur Thorp), and to downright awful (Frank Stallone, Yehunda Efroni).  Stallone performs in a manner best described as smirkily embalmed; his stiff line readings, coupled with this constant half-smile no matter what’s transpiring on screen, is all the proof one needs as to why he never had a career like his brother.  To be fair, Efroni is equally terrible but in the opposite way; he’s a pure cartoon with a hideous German accent to boot that is like nails on a chalkboard.

No matter how big a mystery or Agatha Christie fan you might be, this Ten Little Indians is no fun.  It’s even worse than the dreary and lethargic 1974 version with Oliver Reed and Richard Attenborough, and if you’ve actually seen that one, you’ll know how insulting that comparison is.