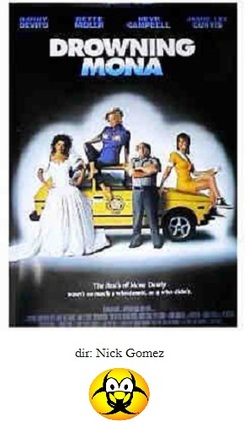 When the Yugo car company arrived in the U.S., they chose Verplanck, New York as the test market for their new brand of automobiles. And the funniest thing about Drowning Mona is the fact that every single person in town drives a Yugo, probably because no one could afford to buy another car. So there. Now that I've spoiled the movie's wittiest and most original plot point (which really isn't a spoiler since this is also mentioned in the trailer) you have no need to waste a single moment viewing the vapid and tragically unfunny Drowning Mona.

It's a shame really. With such comic talents as Danny DeVito, Bette Midler, and Jamie Lee Curtis, as well as supporting characters played by Neve Campbell, Casey Affleck, and Will Ferrell, you'd think this would be quite a funny romp. You'd be so wrong.

Drowning Mona is basically a comic murder-mystery. Mona, played by Midler, drowns when the brakes in her Yugo fail and she catapults through a guardrail into the lake below. There are heaps of suspects ranging from her husband, her son, her son's friend, her son's friend's fiance and so on. In fact every single person in town hated her. Why? Because she was an extremely violent, hateful harridan who made every single person's life miserable. Mona is so despicable, so unpleasant, so aggressively vicious and hateful, that it throws the tone completely off. Is this a comedy? I don't know, I wasn't laughing at watching Midler beat people up, destroy property and ruin lives. Sure, I was glad she got killed, but every few moments when a suspect is being questioned we get another horrifying flashback of Mona in all her vileness.

I like Bette Midler as well as anybody.  I think she is a terrific comedienne and performer, but the woman has not made a good movie in I don't know how many years. In fact, her movies just seem to get worse and worse (as the case of her most recent cinematic disasters, Isn't She Great, Then She Found Me, and The Women, can attest). She needs to do something, desperately.  After the debacles that were Hocus Pocus, That Old Feeling and now this, her film career is indeed on life support.

Danny DeVito is the town's sheriff and he goes the opposite of Midler by underplaying his role until he nearly disappears (probably from embarrassment). I've never seen the usually volatile DeVito sleepwalk through a performance quite like this, he seems very bored and tired as if he was very aware of what a creaky and dull movie he was in. His character is also a Broadway musical freak, and I suppose the movie thinks it's funny to have DeVito talk about them.

Anyway, the movie trudges on with the investigation and we are presented with Jamie Lee Curtis as a white-trash waitress in a hideous wig who is having an affair with both Mona's husband and son. There is also Casey Affleck as Mona's son's friend and Neve Campbell as his fiance.  The jokes run from non-existent to unnecessary: two officers who always seem to bicker with one another (ha ha), a giant lesbian mechanic who makes moves on Campbell (hee hee), a running gag where different people ponder how Mona's son got his hand amputated (ho ho), and then there is Will Ferrell, as the town's strange funeral director, who looks and acts so out of place, it's as if he wandered in from the Saturday Night Live set during breaks.  The film lurches from one disastrously unfunny scene to the next until the wretched conclusion. Who killed Mona? Who cares? This is the only so-called mystery where you'll want to know whodunnit only because it means the movie is finally over.  It's a completely joyless experience.

At least by the end you will know what a veritable rainbow of colors Yugos were once available in.