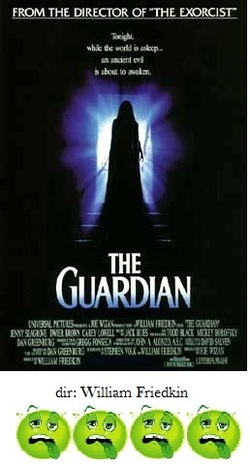 It's probably too much to ask of an audience to buy into the terror that is posed by the Druids; however, The Guardian does just that, and instead of being scary, it's just insanely silly.

The Guardian is sort of a paranormal The Hand That Rocks the Cradle.  Jeannie Seagrove plays a super-hot British nanny that has just been hired by the most boring yuppie couple ever, Carey Lowell and Dwier Brown, after the birth of their son.  Like, The Hand That Rocks the Cradle, no real references seem to be necessary to land such a job, because if they did, they might find out that just about all of the little babies Seagrove has had in her care have vanished.

So what's going on?  Well, Seagrove is some sort of Druidic priestess or something and she needs the babies in order to sacrifice them to a tree...or in a tree...or a tree god...or I dunno.  It's all kinds of murky; she takes the squalling child, intones some incantation and voila, the baby is part of the tree.  Also murky is the crucial timing factor involved in this ceremony, because Seagrove often talks about how a baby's blood 'turns', making newborn blood change into infant blood.  Who knows?

Also thrown in for good measure is Seagrove's power over a certain, although different, tree that is able to obliterate a group of potential rapists by using its limbs and roots to gut and dismember them.  Yes, it's a killer tree.  Even though The Guardian, up to this point, hasn't exactly been good, when this scene occurs, it's just time to give up trying to make any sense of it.  What was just bewildering has now become bewildering and inane.  Director William Friedkin certainly deluded himself into thinking he could bring the same level of terror to The Guardian that he did with The Exorcist.  Somehow, a hottie, blonde, Druid babysitter doesn't make the soul quake with fear, or is that just me?

The film ends (not quickly) as it must with the final violent showdown between Seagrove, who is starting to turn into a tree herself and needs the baby's blood before it 'turns,' and the couple, who are, by this point, seriously wishing they called those references.

The only explanation I can come up with for why a Druid was chosen to be the villainess in The Guardian is that it was one religious group where the current membership would be, should I say, less than influential.  They could be assured no angry letters from worldwide Druidic societies would be sent to try to keep the movie from being released.  Oh, if only there were.