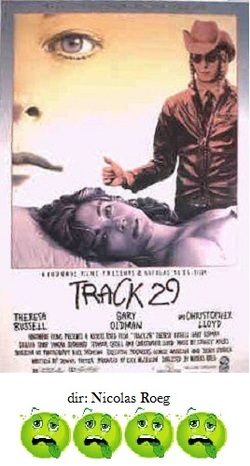 There are few directors that are as infuriatingly inconsistent
as Nicolas Roeg, the man behind such great works as Walkabout and Don’t Look Now.  For every one of these masterful films there are several like Cold Heaven, Bad Timing, and Eureka.  One thing’s for certain, Roeg’s films are always visually interesting, but many times the storytelling is too obtuse for words.  Track 29 falls into the latter category; it’s a maddeningly confused film that turns out to be so absurdly simple-minded that it is the very definition of “sound and fury signifying nothing.”

Poor Theresa Russell got saddled with the thoroughly underwritten role of an unhappy housewife who pines for the baby she gave up for adoption while in her teens.  Her husband, Christopher Lloyd, is a doctor and a model train enthusiast, has nothing in common with her and is involved in an affair with nurse Sandra Bernhard; however, their affair pretty much only involves Bernhard putting on latex gloves and spanking his bare ass.  Enter in mysterious Gary Oldman who claims to be Russell’s long lost son. Now that all of the characters are in place and the situation has been defined, where does it go? Nowhere.

The majority of Track 29 involves Oldman and Russell in a series of shrill tantrums as he complains about the mommy he never had, and she tries to get a grip on her sanity…or something.  I won’t be spoiling any surprises by telling you that Oldman is merely a figment of Russell’s imagination since Roeg tips this early on, unfortunately, he doesn’t even do this consistently since in at least two instances other characters seem to interact with Oldman as if he was really there.  Scene after scene has Oldman scurrying around like an over-caffeinated chipmunk while Russell stares confusedly, sometimes muttering to herself (in a truly awful Southern drawl that comes and goes) about how she doesn’t understand what’s going on.  Tell it, Sister.

Since nothing is going on plot wise, Roeg feels compelled, as he usually does, to paint over the glaring emptiness with visual overload in order to make us think more is happening than there really is.  In Track 29, lots of sparks fly, literally, model trains crash into kewpie dolls and there is much overbearing music and shrieking.  Eventually, Lloyd goes to inspect his trains for possible damage and is jumped and killed by a naked, knife-wielding Oldman.  Russell doesn’t really react to what’s happened; she simply gets dressed and leaves her home while Lloyd’s voice continually calls her name and Oldman disappears into the ether.

Was there ever a chance that Track 29 could work?  I’m not sure. Roeg couldn’t make up his mind as to whether the film was some sort of bold psychodrama or a deranged black comedy. Some moments play for laughs (which don’t materialize) while others go towards the film noir route; it all just falls apart into a pile of disjointed scenes that clash uneasily against one another. Another problem is the terrible performance by Russell which is comprised of lots of clutched bosoms, wringing hands, shaking, shuddering, squealing and the most affected, preposterous line readings you’re ever likely to hear.  She is a decent actress when she is able to tear herself away from hubby Roeg, but under his direction she is just as bad as Bo Derek under the guidance of her own husband, John (Tarzan the Ape Man or Bolero, anyone?).

Track 29 doesn’t really have anything to say, but it sure expends a lot energy trying to say it, nonetheless.