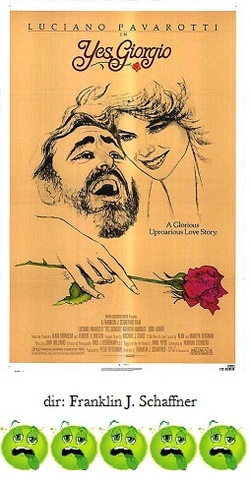 The only viewers who could possibly derive any entertainment value from the curdled romance Yes, Giorgio are those that are already card-carrying opera fans.  For non-opera fans (like me), the movie is one painful, torturous slog.

Yes, Giorgio stars opera legend Luciano Pavarotti, in both his debut and adieu to Hollywood feature films, as opera legend Giorgio Fini.  While rehearsing for his Boston show he comes down with a case of psychosomatic laryngitis and gets treatment from throat doctor Kathryn Harrold, and in cliched movie romance formula, Harrold can't stand him.  Actually, we can't blame her, you see, within the film's first ten minutes Pavarotti has proven himself to be self-absorbed, egotistical and highly sexist (not to mention already married with children), so it's no wonder she blows him off.  It is during this scene where the movie's most infamously, unintentionally funny dialogue takes place: Pavarotti- "Pamela, you're a thirsty plant.  Fini can water you."  Her response?  "I don't want to be watered on by Fini."

But if they don't get together there would be no movie, so after about thirty seconds of moral contemplation, Harrold takes off and drives across the country to catch Pavarotti during his show in San Francisco.  What a backbone.  So, the twosome spend the rest of the movie having sex (thankfully off screen) and do such cutesy-poo things as taking a romantic hot air balloon ride and having food fights in the kitchen.  There's also a side plot involving Pavarotti not wanting to sing at the Met and Harrold, along with agent Eddie Albert, try to convince him to do so.  Yeah, so, hardly riveting stuff.  Needless to say, the romantic sparks do not fly between Pavarotti and Harrold.  He always acts like a misogynistic asshat and she always looks like she smells something bad even during moments when she is supposed to be swooning during his musical moments.

Now, about those musical moments.  Yes, for any movie that stars a famous singer it is a given that there would be musical moments devoted to singing, but a full third (if not more) of Yes, Giorgio is devoted to Pavarotti's vocal chops.  There's barely a movie here at all.  Every few moments everything stops dead for Pavarotti to perform and it becomes clearer and clearer that these performances are only serving to pad the running time.  So, yeah, opera fans can enjoy these moments and ignore the rest, for everyone else it makes an already lousy movie-going experience that much more unendurable.

For opera fans, open up a bottle of vino and suffer through (if you must), Yes, Giorgio.  Just remember, Fini can water you.