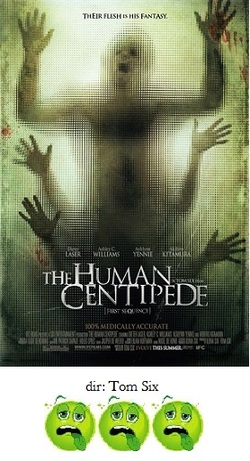 You have to wonder about how writer/director Tom Six came up with this idea.  The history of cinema is filled with mad scientist stories dating back to the silent era with The Cabinet of Dr. Caligari, but the maddest one of all has to be the threateningly titled The Human Centipede: First Sequence.

What does the daffy German doctor (Dieter Laser) here want to accomplish?  A human/arthropod hybrid?  If only.  No, what he wants is to find three people and surgically connect them anus to mouth in order to form one long digestive tract.  Along with this, he will cut the tendons in their knees so they must crawl on all fours, therby creating a human chain resembling a centipede.  Why?  Why not?

The unlucky threesome turn out to be a Japanese man, Akihiro Kitamura, and two American girls, Ashley C. Williams and Ashlynn Yennie.  Tourists all, they just had the grave misfortune to find themselves stranded near the doc's secluded manse.  They are drugged and operated on and wake up attached to one another.  Kitamura is the head, Yennie is the middle and Williams is the end.  So how does this work?  Well, let's see.  Kitamura's ass skin-flaps are sewn to Yennie's face, whose teeth and lips have been removed in order to completely close the circuit, and likewise, Yennie's ass to Williams's face...

The whole concept itself is just so indescribably nasty (even though I've done my best to describe it), but you may be surprised at how, well, boring it all is.  Once the shock of seeing these three connected wears off, there isn't much else to get excited, or even repulsed, about.  The rest of the film just has endless scenes of the centipede crawling around the room, on the lawn, up the stairs, while all three moan and groan.  There are two detectives who show up late in the proceedings to provide some conflict, but typical of the nihilism in so many movies of late (Wolf Creek, Eden Lake, The Strangers) they prove ineffectual, and despite the attempts by the victims to free themselves, it's all for naught.

The concept is all that The Human Centipede: First Sequence has going for it.  For most viewers, that will be enough; however, when it comes to really pushing the envelope, you'd think there'd just be something more.