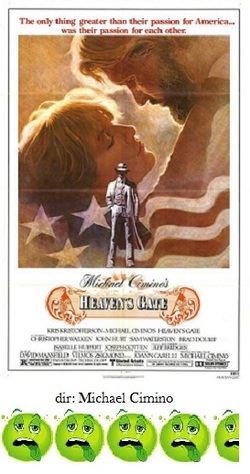 Here it is, the box-office bomb to which all box-office bombs have been henceforth compared to.  Heaven's Gate is a turgid, lumbering behemoth that was a perfect storm of bad decisions, an ego-maniacal director, a spineless studio and runaway spending.  It's the three 'B's: bad, bloated and boring.

Everything that can go wrong did go wrong.  Director Michael Cimino, hot off winning Oscars for his previous film, The Deer Hunter, had the power to make any movie he wanted, so he hauled out an old screenplay of his about the so-called Johnson County War, a late 19th century skirmish in Wyoming between immigrant settlers and paid mercenaries.  This event barely merited enough drama for a television pilot let alone a nearly 4-hour epic, and in the movie, the event takes up about ten minutes of screentime, which leaves a lot of time for dead space.

Cimino believed he could catch lightning in a bottle a second time, so he took the structure of The Deer Hunter and replicated it for Heaven's Gate.  The Deer Hunter was a 3 hour Vietnam War drama; however, the entire first hour was dedicated to a wedding.  But the wedding served a purpose, it introduced us to the characters, we were given their backstories, personalities, and relationships.  For Heaven's Gate, we're given a Harvard graduation ceremony, and it simply involves John Hurt giving an endless and ponderous speech with a bazillion cutaway shots to Kris Kristofferson in the audience, laughing.  After the speech is a lawn dance and then, bam!, we're in Wyoming.

Kristofferson is the local sheriff, Isabelle Huppert is the madam he loves and Christopher Walken is the hired gun out to eliminate the immigrant settlers and win Huppert's hand.  Other random characters are played by the likes of Jeff Bridges, Sam Waterston, Joseph Cotten, and Brad Dourif.  So, for 2+ hours, the story wanders from character to character as they say barely anything of any significance and we wait and wait and wait some more for something, anything, to happen.  There are such diversions as a lengthy scene of the immigrants roller-skating, attending cockfights, or on occasion, getting gunned down by someone else.  The promised battle does arrive, but it is the very definition of underwhelming.  Apparently, it consisted of a bunch of people riding horses or wagons in a circle with periodic gunshots, all of which is obscured by so much dirt and dust that it's impossible to see what's happening.  Aside from all the dust and grime, the art direction of Heaven's Gate is quite impressive, even though most of it is barely onscreen long enough to really register.

The story behind Heaven's Gate's release is more interesting than the movie itself.  After an epically extended shooting schedule, over a million feet of exposed film, and a budget that quadrupled, Cimino finally presented Heaven's Gate in late 1980.  The screening went so disastrously, the film was pulled and went through 5 months of re-editing and was re-released with a run-time slashed to just over 2 hours.  It didn't help.  Heaven's Gate bombed, Cimino's career never recovered, and United Artists, the studio that financed it, spiralled into bankruptcy.

To this day, Heaven's Gate is synonymous with box office disaster (for example, during the filming of Kevin Costner's Waterworld, it was common to hear it referred to as Kevin's Gate), and I can't think of a better choice for that dubious honor.