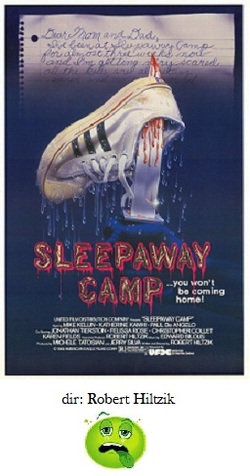 As you can probably guess from the title, Sleepaway Camp is yet another addition to the tiresome 80s tradition of the summer camp slasher movie. But this time, it's a little bit different. True, it's still got plenty of gory deaths, bad acting, and cheap production values; however, the filmmakers put tongue firmly in cheek. Nothing about Sleepaway Camp is to be taken 100% seriously. If you have a yen for the bloody, a sense of humor, and an understanding of the genre, you might be surprised at how entertaining it is.

Now, unlike similar films of the genre, the slasher stalking the campers this time is not some crazed legendary lunatic that's whispered about around a campfire (such as Jason of Friday the 13th, Madman Marz of Madman, and Cropsy the deformed gardner of The Burning), but is actually an unknown mystery..until the end that is, but I'm getting ahead of myself.

Like most of these movies, there is a prologue to set everything up. One summer day on a lake, a father, along with his young son and daughter, are out on their sailboat. There is also a teenage couple in a speedboat with a waterskier. Anyway, the sailboat accidentally overturns, pitching the family into the water, at the same time, the teenage couple become distracted and are not paying attention when their speedboat crashes into the family. The father and one of the children are killed.

Jump to 8 years later. Two teens, Angela (the surviving child from the accident) and her cousin Ricky are on their way to Camp Arawack. Angela is a very shy, quiet girl who rarely speaks and Ricky is very protective of her. Once we get to the camp we're  introduced to several pieces of soon-to-be dead-meat...er, characters: Paul, who is Ricky's best friend and Judy and Meg, the nasty mean girls who torment poor Angela, amongst others.

Basically "Sleepaway Camp" falls into a predictable rhythm. Someone teases, torments or abuses poor Angela, and shortly thereafter, they wind up dead. First is the camp cook, who is doused with boiling water after attempting to molest her, next is a male camper, who is drowned after verbally abusing her etc. etc. The deaths actually get pretty creative, as we see a murder by beehive and another by curling iron.

The acting, as expected, isn't very good. They range from bland (Felissa Rose, who plays Angela, but then again, her character isn't very animated to begin with), to waaaaay over the top (Karen Fields, playing evil camper Judy, was apparently channeling the ghost of Joan Crawford, what with the sneering hatefulness), to just bizarre, Angela's aunt (Ricky's mom, played by Desiree Gould) is performed so nuttily you'd swear the actress wandered in from the set of another movie, but then again once the film ends it actually makes sense.

So, who is responsible for the hideous murders at Camp Arawack? Angela, as revenge against her tormenters? Ricky, to protect his beloved cousin? Someone else who wants to frame them?  Sleepaway Camp reaches a frenzied zenith in its final moments. Campers are dispatched of and bodies are discovered at a rapid clip (even an unattended group of youngsters camping in the woods meet a grisly end), until two counselors discover Angela and Paul at the lakeshore and......

...And I wouldn't dream of spoiling what is definitely one of the most draw-droppingly bizarre surprise endings in horror film history. After watching it a second time, the filmmakers put all the clues and hints there, it's just up to the viewer to pay attention. They do not cheat.  Granted, Sleepaway Camp is not, technically, a "good" movie per se. It does send up the genre quite effectively, and it is never boring. And, amazingly, it's somewhat unpredictable.

For a summer camp slasher movie, I really can't think of higher praise.