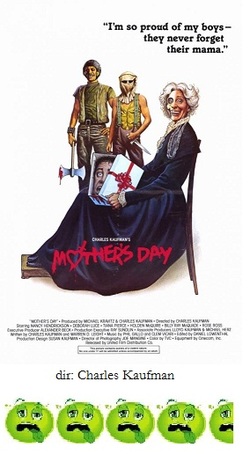 On the surface, one would expect Mother's Day to be another one of those holiday-themed slasher pics from the early 80's; however, this odd little flick is actually more like a combination of The Texas Chainsaw Massacre and I Spit on Your Grave. And, no, that isn't a good thing.

Mother's Day tells the tale of three former college roommates who, once a year, get together to have a girl's weekend reunion. They are Trina, a rich-bitch Beverly Hills socialite, Abbey, a nerdish girl who is caring for her demanding, dying mother in Chicago, and Jackie, a love-lorn New Yorker. Anyway, the gals decide to go camping in an area they are warned to stay away from...so you can pretty much guess it's bad, bad news.

Mother's Day also tells another tale. There's this crazy old woman who lives in seclusion out in these woods with her two bloodthirsty, degenerate sons, named Ike and Addley. They take great glee in torturing and butchering hitchhikers and campers for no discernable reason, naturally.  And, naturally, these two groups' paths cross, much to the detriment of the girl campers. Ike and Addley kidnap them in their sleeping bags and haul them back to their house as a present to Mama. You see, Mama likes it when her boys bring her presents! She likes it even better when she gets to watch her sons rape, beat and kill them too! I'm not sure what's more disturbing, having a mother who likes to watch people getting tortured or having a mother who likes to watch her own sons rape girls.

In any case, Jackie is singled out to be the first victim. The boys dress her up in a little girl's dress and make her carry a dolly, then they procede to punch, kick, slap, rape and maul the tar out of her...all the while Mama watches and claps with glee.  Trina and Abbey escape their bonds, find Jackie, and haul ass into the woods. Jackie, unfortunately, expires from her beating the night before...so now it's REVENGE!!!!

What can one say after experiencing Mother's Day? Is it bad? Oh yes. Is it unwatchable? Well, not totally.  One thing that really stands out in this film is the acting. Seriously. Our three heroines, especially, are way too good for the material; they have real personalities and are intensely likable.  You really do hate to see anything bad happen to them and you root for them during the film's final passages (Nancy Hendrickson as Abbey is especially good, even though this was her only screen credit). The three villains are equally convincing as well..although, by the end, they go from being menacing to being very cartoonish, and Mama, played by Rose Ross, is a sight to behold with her crossed-eyes, neckbrace and train-wreck fashion sense.

The screenplay even attempts, although it fails most of the time, to try and give all six main characters three-dimensions with backstories, including Abbey's serious mother issues, Jackie's dating problems in college, and Mama's fear of her deformed sister, named Queenie, who supposedly still wanders the woods.

But all in all, Mother's Day is a pretty despicable affair...and if you can stomach it all the way to the end, get ready for one the more ridiculous twist endings in film history.  Consider yourself warned.