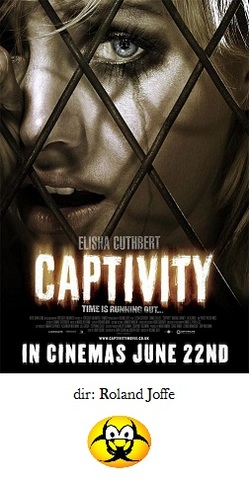 After Hostel and Saw became surprising hits, studios began rushing out other so-called 'torture-porn' films hoping to ride on their coattails.  The fad didn't last long.  Both of those franshises though could be considered high art compared to the threadbare and empty bottom of the barrel entry called Captivity.

At the very least, Hostel had some interesting locales and leavened the blood and excess with a bit of humor, and Saw put its violence within a moral subtext.  Captivity offers nothing but a slow slog through the motions putting as little effort as it possibly can and still be considered a movie.

Elisha Cuthbert stars as a minor celebrity who is drugged at a club and then wakes up to find herself locked in a dungeon-like cell by an unknown psychopath.  Another victim, Daniel Gillies, is also captive in a cell next to hers.  In between a lot of dull conversations by these two blank slates, Cuthbert is periodically taken from her cell and subjected to various physical and psychological tortures.  Who is doing this and why are the two big questions asked.  We find out who.  The reasons why this is happening can best be described as murky.

That's all there is to Captivity, just pain and torment until the finale.  I'll spare you the details of all of the hideous things Cuthbert is subjected to save for one.  We see Cuthbert strapped down in a dentist's chair while the maniac uses a blender to prepare a special 'drink' for her; he takes out various human body parts from a container, like ears and fingers and lots of blood, and then purees it all into a nice, gory sludge.  Next, he shoves a tube down Cuthbert's throat and then pours the mixture into a funnel that's attached to it.  So we get a wonderful extended scene of Cuthbert gagging and choking as the chunky mess slides through the tube and down her throat.  Yum.  The final passages that reveal the psycho's identity which are followed by an allusion to Cuthbert taking up the psycho's mantle a la Saw, are lame and insulting.

It's hard to believe that Roland Joffe, who received Best Director and Best Picture nominations for his very first two movies, The Killing Fields (1984), and The Mission (1986), could be responsible for something so worthless.  Captivity is just another step down into oblivion.  After The Mission, Joffe has helmed one dud after another, such as the epically dull Fat Man and Little Boy, the miscast City of Joy, the hamfisted comedy Goodbye, Lover, and the disastrous adaptation of The Scarlet Letter with Demi Moore.  You'd think a career couldn't sink lower than The Scarlet Letter, but here is evidence to the contrary.