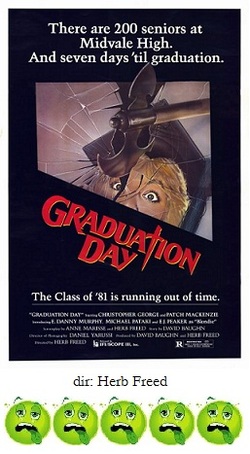 Quick to cash in on holiday-themed slashers, the sloppy and ridiculous Graduation Day appeared on the scene and was the cause of much head-scratching.  Here is a film that is titled, and whose plot revolves around, high school graduation, and yet it can't get any of the easy and obvious details right.  Graduation Day doesn't even try.

The prologue deals with the unfortunate death of a female runner who perishes on the racetrack during a big meet, and now there is a killer who, it would seem, wants revenge on the coach (an embalmed Christopher George) and the other members of the track team.  Where does graduation figure into this?  Except for a brief scene involving the graduation rehearsal (which comprises of about 25 students despite the poster art which claims there are 200 seniors) there isn't anything having to do with the titular event.

There are so many questions:  Why are students killed who had nothing to do with track?  Why is the school quarterback still walking around with a football in full uniform as if it were still Spring?  Doesn't he know football season is long since over?  Doesn't he know that if a stranger throws a football at him with a sword sticking out of it it's usually a bad idea to try and catch it?  How is anyone really responsible for the death of the young runner who had an undiscovered heart defect?  How come no one seems to react or be affected at all by the rash of violent deaths of their fellow schoolmates?  All of these unanswered questions might've been easily dismissed if the film were slick or entertaining enough.  But no, this z-grade production just slowly limps along and finally throws itself over the 90 minute finish line.  Graduation Day is just a string of ridiculous and cheap-looking murders surrounded by a ton of dead space.  Endless.

P.S. Yes, that is that Vanna White in Graduation Day, and, no, she doesn't get killed. Darned the luck.