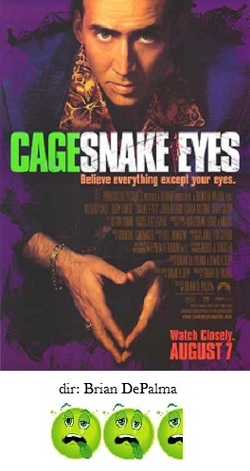 Is there a more wildly uneven director than Brian DePalma?  When approaching a new film of his, you never know if you'll get 'blow your mind amazing' (Carrie, Blow Out, Scarface) or 'flame out disastrous' (Raising Cain, Mission to Mars, Femme Fatale).  Snake Eyes starts off strong, but tanks quickly.

Nicolas Cage stars as a hot shot cop in Atlantic City who becomes involved in a conspiracy when the Secretary of Defense is assassinated at a boxing match. DePalma sets everything up with an extremely long and masterful tracking shot following Cage around the arena where we encounter several supporting characters, including Gary Sinise as a military officer assigned to protect the Secretary. This shot is quite grand but it immediately becomes clear that DePalma is more interested in impressive camerawork than plot, story or logic.

So, who assassinated the Secretary of Defense? Several key conspirators include a mysterious red haired lady, the defending champion boxer, a drunk in the stands, a Palestinian terrorist, a female physicist and, yes, Gary Sinise. You see, no suspense is dredged up because it should be a secret that Cage's best pal Sinise is in on the crime, but this key plot point is given away right quick, and all of the pieces to the puzzle are basically shoved in your face so you won't miss anything. So for the next hour it's just a waiting game until Sinise is caught.

All this glitz and style is piled onto such a paper-thin and simple-minded story. And some ends are left frustratingly loose to boot. Like, was the lady carrying the card "Round 7" involved or not? Or why didn't the giant wave from the hurricane (did I mention the entire film takes place during a hurricane?) that appears to sweep everyone away, really sweep anyone away? You see the wave, you see characters trying to get away, you see the wave demolish everything in its path...and then....we jump to several days later and everyone is okay.

I didn't even mention Nicolas Cage's performance which is almost (but not quite as) over the top as his frightful work in Vampire's Kiss.  In that one he was a normal guy turning into the undead, in Snake Eyes it's just a character trait. After about a nanosecond alone with this guy you'd want to punch his lights out.

Snake Eyes is just inane eye-candy for any moviegoer who has trouble figuring out those Mary-Kate and Ashley Olsen mysteries. For those more discriminating viewers, go rent DePalma's 1981 film Blow Out and see how he did similar material so much better.