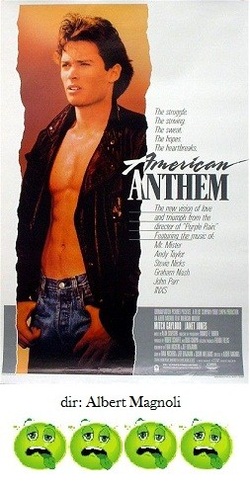 Director Albert Magnoli, hot off his immense triumph in 1984 with Purple Rain, believed he could turn Olympian and non-actor Mitch Gaylord into a film star much the same way he did with Prince.  American Anthem was the flashy and empty result.

Gaylord, a world-class gymnast, plays, well, a gymnast.  Only in the movie, he hasn't had the same kind of success.  You see, his daddy doesn't approve of all this nonsensical tumbling and flipping and believes Gaylord would do better to spend his time and energy on the family farm.  Janet Jones, a non-gymnast actress, plays the newest athlete at the  gym that Gaylord frequents.  Naturally, he falls for Jones and she inspires him to begin training for the Olympics despite his daddy's objections.

As has been chiseled in movie-script stone, the predictable outcome has Gaylord making his dreams come true, getting the girl and gaining the respect of dad.  We have all of the 'triumph in the face of adversity' cliches piled on top of one another: we have the big set back, the big family fight, and the big misunderstandings and miscommunications.  We have a distraught Gaylord crying in a thunderstorm as he does a flawless routine on a convenient high-bar that happens to be in a nearby tree.

And, of course, we have the big gymnastics Olympic trials; however, it's clear that Magnoli had absolutely no idea how a real gymnastics meet looks or how it is run.  The sports arena is awash in darkness and shadow while thousands of flashbulbs are going off and thunderous rock music is blasted through the speakers.  With a gymnastics meet like this, it's a wonder a majority of the athletes don't wind up with broken necks.

As an actor, Mitch Gaylord is a hell of a gymnast.  It's really a toss up as to who is the worse actor: Gaylord, or his real-life gymnast contemporary Kurt Thomas, who starred in the ridiculous Gymkata.  Needless to say, neither guy had much of a career.  As for Albert Magnoli, after American Anthem was laughed off the screen, the directing offers have been slim to none.  American Anthem deserves a place of honor on any list of  the very worst sports movies to be released by a major studio.