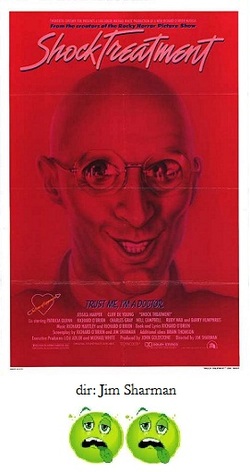 Bet you didn't know they actually made a sequel to The Rocky Horror Picture Show.  There's a very good reason you didn't- It's not very good.  Shock Treatment tries and fails to catch lightning in a bottle a second time and proves the adage that states you can't make a cult film on purpose.

Tim Curry, Susan Sarandon and Barry Bostwick all wisely steered clear of this forced and obvious attempt at cool. Richard O'Brien, Patricia Quinn, Little Nell and Charles Gray all stuck around, probably because they had nothing better to do.  Richard O'Brien, who was the creative force behind Rocky Horror also wrote the screenplay and composed the song score for Shock Treatment, and although a song here and there isn't too bad, there's just nothing here that you'll be humming after the end credits roll.

Shock Treatment follows Brad and Janet, this time played by Cliff DeYoung and Jessica Harper, as they return to their hometown of Denton, which suddenly seems to have been taken over by a bizarre television game show that's run by the dastardly corporate giant Farley Flavors (also played by DeYoung).  Flavors wants Janet for himself and has two quack psychiatrists, O'Brien and Quinn, to declare Brad insane.  I know none of this sounds like a game show, but the entire town populace is in the studio audience and everything plays out in front of cameras, so take it as a given.

Is the story interesting?  No.  In fact, it's nearly impossible to follow.  Although it wasn't intended to be lucid, exactly (after all, Rocky Horror's plot was pretty ridiculous), but here it's just a jumble of set pieces and songs that are edited without any sense of rhythm.  Every scene slams and wrecks against every other scene in a traffic jam of incoherence.  How are the songs?  Forgettable, mostly.  The title track is reasonably catchy but way too short, "Bitchin' in the Kitchen" is somewhat clever, but DeYoung is not exactly a great singer and Harper's voice is so deep you almost think you're listening to Tim Curry, and "Little Black Dress" wishes to be this film's "Time Warp," but hardly sounds like anything you'd hear anywhere outside the movie.  The rest of the songs are negligible at best.  Is it funny?  No.  There's hardly a clever or cheeky line anywhere to be found.

Needless to say, Shock Treatment belly-flopped in a big way.  Die-hard fans of Rocky Horror hated it and mainstream audiences stayed away in droves.  O'Brien and returning director Jim Sharman thought they could recreate the magic that became The Rocky Horror Picture Show, but since Shock Treatment wasn't conceived to be a good musical film first, in order to allow for success to occur organically, they forced the issue and were soundly rejected.