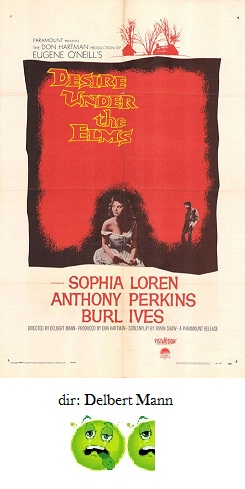 Based on the lesser-known Eugene O'Neill play, Desire Under the Elms is dated melodrama with a capital 'M'.  It all might have worked had not the movie been so strangely miscast and unintentionally funny.

Desire Under the Elms stars Burl Ives as the hard and hateful patriarch of a farming family who brings home comely Sophia Loren as his new wife.  This event doesn't sit well with Ives's three sons, two of whom take off immediately to California to prospect gold.  The one son remaining is Anthony Perkins, the supposedly buff studmuffin that becomes romantically involved with Loren under the nose of Ives.

Yes, Anthony Perkins's name was uttered in the same sentence with 'buff studmuffin'.  Well, we have to take this on faith because, as portrayed in the movie, Perkins is little more than boyishly lean, looking as if he can barely lift an axe let alone actually chop wood.  But nonetheless, once Loren gets a gander at Perkins without a shirt on, she goes from bitchy money-grubbing, gold-digger (in the early passages she is all wide, blazing eyes and flaring nostrils) to naughty stepmother in about three seconds (with eyes that blaze even wider and nostrils flaring ever bigger).  This is not one of Loren's better performances, putting it mildly.

Anyway, in no time, Loren gives birth to a son.  This is good news for Ives, since now he can leave all of his property and land to this new child instead of leaving it to Perkins who feels that all of it is his anyway since it originally belonged to his mother.  But we, Loren and Perkins, and all of the townsfolk who arrive at the farm for a 'christening party', know full well is that Perkins is the baby's daddy.  All of this talk about what will become of the farm when Ives dies, causes Ives to prove how fit he is as a septugenarian by performing one of the most batsh*t insane dance scenes in the history of the movies complete with slapping thighs, jumpkicks, somersaults and the flinging around of every female who isn't wise enough to get out of his way.

The grand finale has Perkins and Ives duking it out in a barn, where Perkins claims paternity and Ives sows seeds of doubt about Loren's true motivations in having a child.  Perkins breaks it off with Loren and leaves home which causes her to suffocate the baby in order to prove how much she really loves Perkins.  But, alas, Perkins returns swearing to love Loren, and they both share the blame for the baby's death and await to be hauled in by the authorities and hung.

I'm sure Desire Under the Elms was meant to cause female movie-goers of the day to clutch throats and unleash copious amounts of weeping.  Yes, today, there still is lots of weeping, but it's the kind of weeping that usually accompanies serious bouts of uncontrollable laughter.