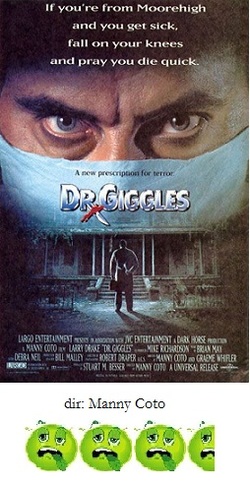 Freddy Krueger and the Nightmare on Elm Street franchise had a lot to answer for.  The first Freddy film was downright terrifying, but with each sequel, as his iconic status grew, the films became more and more of a joke; and Freddy Krueger turned into the king of the one-liners (ba-dum-bump).  Naturally, the studios all attempted to jumpstart their own like-minded franchises, and the results were hideous.  The worst of that lot is easily Dr. Giggles.

Larry Drake plays the psychotic Dr. Evan Rendell, but he's nicknamed Dr. Giggles because he's a doctor....and he... giggles.  So the hook here is that he offs his victims with various medical equipment (syringes, band-aids, stomach pumps etc.).  And, yes, with every moment Giggles is onscreen he is coughing up one medical pun after the other, and it all gets real old, real fast.

The plot is the half-baked story of how Giggles wants revenge on the town that shamed his equally psychotic father, not that any of that really matters.

The desperation for a franshise hit permeates the entire film like the stench of week-old roadkill.  The film wasn't the hit that the studio wanted (and neither were the like-minded films Shocker and Brainscan), and we were thankfully spared a sequel, or other similar films, like Prof. Chuckles, Sgt. Guffaws or Officer Snickers.