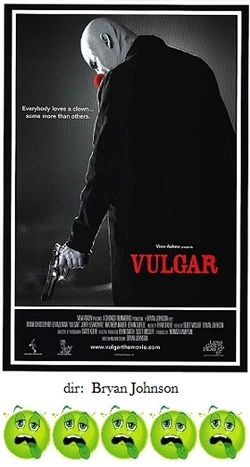 Vulgar is a grimy, offensive wallow that tries desperately to be some sort of sleaze masterpiece.  Unfortunately, it's schizophrenic in tone and attitude and will lower itself to depths others wouldn't dare reach.  Is it a comedy?  Is it a satire?  Is it a circus funhouse retelling of Death Wish?  The film doesn't know, and neither do we.  We just feel uncomfortable and disgusted.

Brian O'Halloran (Dante from Kevin Smith's Clerks) stars as Flappy, a low-rent party clown without any real talent for the job.  He's teetering on the brink of poverty, and in order to make money he comes up with the idea of hiring himself out to bachelor parties.  You see, he'll show up as a joke and begin a strip tease for the confused groom until the real strippers show up.  To think that he actually believes this asinine idea will be a cash cow tells you all you need to know about his intellectual level.

Anyway, now calling himself Vulgar, his very first job turns into a tragic disaster.  He's lured to a motel room, and instead of a bachelor party he finds a vicious redneck and his two sons who then proceed to beat and repeatedly, brutally gang rape him.  This scene is lingered on for so long that it'll send most viewers sprinting for the remote control to slam the stop button.

Afterwards, feeling suitably violated and suicidal, he happens upon a neighborhood hostage situation where a man is holding his family at gunpoint.  Flappy decides to enter the house and save the kids, hoping to be killed in the process; however, it doesn't work out that way.  Both he and the kids survive, and he is catapulted to instant fame and is given his own children's show where he progresses to superstardom.  Unfortunately for Flappy, the evil rednecks from the motel had filmed the whole gang rape thing and blackmail him for cash, otherwise the tape will be leaked and he'll be labeled a pervert and lose everything.  Flappy won't take this lying down (pun intended)!  So the finale has he and the rednecks involved in a painfully violent revenge bloodbath, with blood, bone and brains sprayed everywhere.  The end.

It's hard to believe this idea was even written down let alone financed and filmed.  I guess having ties to indy king Kevin Smith didn't hurt; however, writer-director-costar Bryan Johnson didn't learn much else from him.  The film looks grainy, the sound is tinny and the sets are the very definition of flea-bitten.  The sole bright spot in this swill is the performance of O'Halloran.  Or, should I say, there's one scene where O'Halloran gives a good performance.  The scene in question is in the aftermath of the rape where he tells his best friend (Johnson) what happened; the pain, sorrow and terror that O'Halloran is able to express is quite potent.  That's 5 minutes of silver lining amongst 81 other minutes of very, very dark cloud.

After watching Vulgar, don't be surprised to feel the need for an epically long and very hot shower while scrubbing with an industrial-level disinfectant.