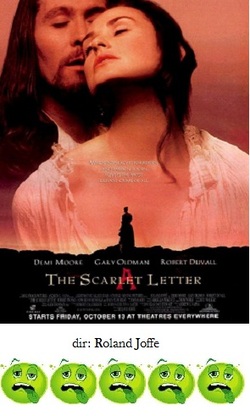 When it comes to determining which film is the worst celluloid travesty of a literary classic, Roland Joffe's, er make that Demi Moore's The Scarlet Letter, is an huge contender. This is not so much an "updated interpretation" as it is an example of complete reconstructive surgery.

Has there ever been as depressing an example of a once great director spiralling down into a laughing stock?  Roland Joffe's first two films, The Killing Fields and The Mission, were both well-deserved Best Picture nominees, and after that, something....happened.  The remainder of his ouevre has been comprised of still-born epics (Fat Man and Little Boy, City of Joy), misdirected comedies (Goodbye, Lover), gag-inducing exploitation (Captivity) and this god-awful hunk of crapola.  But even Martin Scorsese wouldn't have been able to do anything with screenwriter Douglas Day Stewart's hackwork.

The characters are all the same, but everything else and I do mean everything, is different. There are so many jaw-droppingly horrible alterations, one hardly knows where to start. But here a few contenders: (1) Hester spies Dimmesdale swimming in the nude, and is obviously aroused, later, she engages in a little "self-gratification" after her slave girl(!) undresses her for a bath; (2) The act of adultery itself takes place in a barn on a pile of beans while the slave girl watches, afterwards the girl gratifies herself with a candle in the bathtub; (of course, since the seduction and adultery had taken place before the beginning of the novel, all of this is just thrown in just for the sake of adding in some skin and humping); (3) Chillingworth's dissapearance is explained that he has been living with an Indian tribe, this is shown with Duvall wearing a dead deer carcass on his head and dancing around a bonfire screaming out intermittent war whoops.

Get the picture? Oh and it gets worse. Throughout the film, a red canary flies around signalling to all that symbolism is afoot. Even a an Indian attack and a witchhunt trial are thrown in for good measure, just for the sake of it.  Even these hilariously bad moments can't redeem it on an entertainment level, it's just so loooooong and boooooooooring.  In promoting this mess, Demi Moore did many interviews defending the changes from the source material, claiming that no one read the book anymore, so it wouldn't make any difference.  Why not just change the endings to Romeo and Juliet or Of Mice and Men, for that matter?   Let's just tack on a happy, Hollywood ending to all of these famously tragic tales.

By completely gutting the source material, this film version of The Scarlet Letter is rendered completely unexplainable.  It has absolutely no reason to exist.