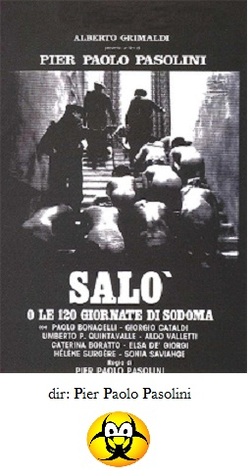 Hmmmmm....let's see what words I can come up with to describe Salo, or the 120 Days of Sodom. Sick? That's a good word. Or how about Repulsive? Disgusting? Disturbing? Reprehensible? Vile? Those are pretty accurate words as well. No film has ever turned my stomach into nauseating knots as this one did. Believe it or not, it's praised in some critical circles.

You may have heard of Salo by Italian director Pier Paolo Passolini, because it was the subject of some obscenity cases. Apparently, video rental chains carried it and some people got hot under the collar wanting it declared obscene and permanantly removed. Now, I do not support censorship under any circumstances, but if a movie were to be declared obscene, this one is it. You think Caligula is bad? Salo makes Caligula look like Barney's Great Adventure (which a horrific film in its own way).

Let's see if I can drean what the plot of this flick is. In Italy, during WWII, a group of military officers go to various villages and to gather a group of teenagers to take back with them to a palace far, far away. While looking over the young people they make them disrobe and parade around naked before making their selections. Once the have gathered 8 boys and 8 girls they take them to their palace where they are subjected to the most sick and disgusting sexual and violent acts ever filmed.

Salo is based on the writings of the Marquis de Sade, so that should give you an idea what is in store. The film is divided into three sections; the first part's main focus is on sex and rape. Several of the youngsters are raped, and in between the rapes and beatings, they are made to go to "classes" where they learn various sexual techniques from ex-brothel madams who are staying at the palace as well. During dinner, one of the officers forces a waiter to rape one of the girls, and then he gets so excited, he drops his pants, bends over, and receives the same.

The second part of Salo is where things really get sickening.  We get lovely experiments in urination and defecation. One of the madams tells a lengthy story to the youths about a man who loved to eat her feces. Then, the meanest of the officers, drops his pants, sh*ts on the floor, and forces one of the girls to take a spoon and eat. Which she does, crying and gagging, in close up. At dinner the waiters bring in silver trays piled with steaming turds, serving them to everyone, and then we get to see everyone enjoy a nice turd buffet. Later that evening, several boys are raped, then an officer forces a girl to stand straddling his head so she can urinate on his face.

And now for the grand finale, where we get lovely images of the kids being tortured and killed. A boy has his genitals burned, a girl has her breasts burned, another boy's tongue is cut out, another has his eyes poked out with a dagger, a girl is scalped, and so on and so on. Afterwards, the officers do a jig in the field amongst all of the carnage. The most disturbing thing is how unbelievably realistic all of this death is, so realistic in fact, that it takes more than a little bit of effort to accept it as fake.

The most mind-boggling thing is how Passolini's Salo is praised. For what? It's utterly senseless and nauseating. I'm serious, I really felt like throwing up about midway through, and had to turn away and choke back the bile for the remainder of it.  Their argument entails how this film is really an allegory, a pointed satire and statement against fascism and Italy's role in WWII.  Spare me.  Maybe that was Pasonlini's intention, however, he fails on an apocalyptic level.  Any message within this film has been buried underneath an avalanche of filth, bodily excretions, blood and vomit.