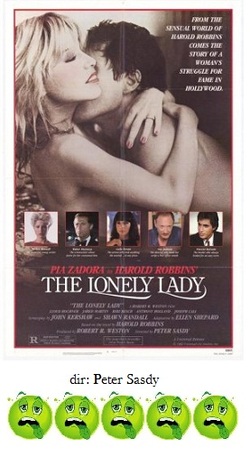 In my review of Butterfly, Pia Zadora's film debut, I stated that her performance wasn't really all that bad, or should I say, she was equal to her co-stars who supposedly could act, like Stacy Keach and Orson Welles.  In the hilariously awful The Lonely Lady, Zadora has nowhere to hide.  Here, she's front and center in her dreadfulness for the whole world to see.

Based on the novel by schlockmeister Harold Robbins, The Lonely Lady is about the sordid experience of Zadora, a budding screenwriter who wants to make it big in Hollywood.  At the film's beginning, Zadora wins an award at her high school for 'Most Promising English Major', and that night, while partying with some rich kids, she's assaulted by a young Ray Liotta who proceeds to rape her with a garden hose.  No, really.

After she recovers sometime later, she meets and falls in love with aged Lloyd Bochner who also mentors her in being a screenwriter.  This is all well and good until, while they are on set during the filming of a movie Bochner wrote, she rewrites a lengthy, difficult gravesite scene that Bochner can't get right.  What does she write?  "Why?"  Yes, this is her great contribution, writing one word and saving the production.  This pisses off Bochner who insults her by, yes, waving around a garden hose and asking "Is this your kick?"

Oh, it all gets so much worse.  Zadora falls in love with actor Jared Martin who then dumps her when she gets pregnant.  She gets an abortion, all to the chagrin of her booze-swilling mother Bibi Besch who goes right up in the pantheon of the worst movie mothers ever.  After Martin comes oily Joseph Cali who promises to get her script produced, but in the meantime she works in his Hollywood nightclub and they have such erotic encounters as having Zadora lie naked atop a billiard table while Cali tries to...er...sink his balls into her pocket.  But he's a sleazebag, too, and pimps her out to prospective producers.  Those who were waiting for a Pia Zadora lesbian scene will be delighted to find that here as well.  After all of this, Zadora goes nutso, banging on her typewriter while the mocking faces of those who've abused her swirl around the typewriter keys.

Yes, Zadora is committed to an asylum, but when she gets out, she writes the screenplay of her life, and at the Oscars...er, no, the "Movie Awards That Are Supposed to Resemble the Oscars Since We'd Get Sued If We Actually Called Them The Oscars" where Zadora wins the award for Best Screenplay.  And in a movie filled with howlingly bad dialogue, the immortal moment occurs when Zadora is on stage receiving her award and claiming that "she's not the first woman to have to f*ck her way to the top."

The Lonely Lady is just a sleazy, misogynistic bit of trash.  But it's an entertaining bit of trash.  The entire cast is uniformly over the top and dreadful and the script is filled with that aforementioned laughable dialogue.  It's definitely the kind of movie where one should  invite a bunch of friends over to get sloshed and make fun of it, or create a drinking game around everytime Zadora gets nekkid.

There may be many worse films out there, but few are as unintentionally funny as The Lonely Lady.