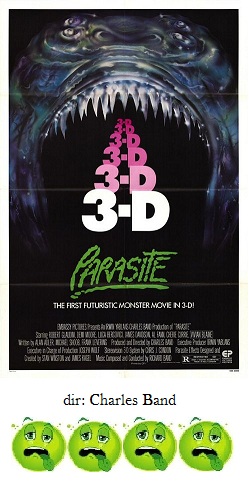 If it weren't for the fact that Parasite was the movie that gave Demi Moore her first starring role, it would have never had any life beyond its mercifully brief theatrical run.  Lucky for her almost nobody saw it in 1982, otherwise she might never have crossed over into stardom.

Parasite takes place in a post-apocalyptic future, the go-to cliche for all low-budget sci-fi romps (Mad Max has a lot to answer for), where the world is a great big desert.  Robert Glaudini is a scientist who arrives in the tiny, ramshackle outpost of Joshua with a parasite growing in his belly and another in a metal canister he carries with him wherever he goes.  See, while in the lab he accidently spilled some parasite larva onto himself, which burrowed inside him, and now he tries to find a cure.

The rest of Joshua's inhabitants include Vivian Blane as the owner of the local hotel, Luca Bercovici as the leader of a roving band of delinquents which also includes ex-Runaway Cherie Currie and Demi Moore as the town good girl who likes to supply the local diner with lemons.  Anyway, Bercovici and his pals steal Glaudini's canister and unleash the slimy creature which proceeds to start chomping through the cast.  Complicating matters is a government "merchant," James Davidson, who is looking for Glaudini so the parasite, which is a governement bio-weapon of course, can be returned to the powers that be.

This sounds all well and good on paper, but Parasite takes forever to get going and we are treated with so many long stretches of nothing as we wait for the creature to start getting busy, which doesn't happen until well past the halfway mark.  But when it finally does, it's underwhelming.  The creature just looks like a giant tadpole with teach that barely squirms, except for the movie's highlight when it comes bursting out of Blane's face.  So how do Glaudini and Moore kill it?  In the most glaring lapse of logic, Glaudini figures out how to kill it through osmosis or something.  Really.  He spends the whole movie not knowing how to stop the parasite until he just suddenly says, "I know how to kill it!  Sound waves!" out of the blue.  And it works!  Life is good.

Parasite is an agonizingly boring and predictable non-experience.  Nothing really happens.  It's just a bundle of elements stolen from other, better movies.  Glaudini sleepwalks through his performance, barely mustering enough energy to be heard but the rest of the cast, Moore included, is serviceable if forgettable.  The creature, by Stan Winston, is lame, and the deseperate attempt to gild this junk, filmed and exhibited in 3-D, turns what was already drab and cheap looking even drabber and cheaper.

Parasite should just be whittled down to a thirty-second clip of the face-bursting scene.  It's the only thing anyone would remember about it.