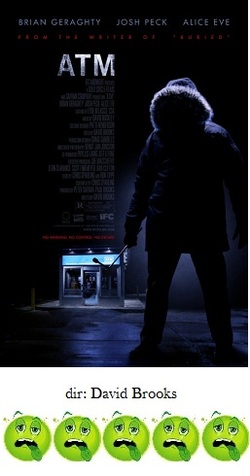 After some initial promotion, the sluggish thriller ATM was given a cursory release on two screens on the same day that the studio made it available on demand.  There's a very good reason why: It's one of the dullest movies featuring the dumbest characters to be seen in quite a while.

The plot itself had some merit: A trio of people find themselves trapped inside a 24-hour ATM while an unknown, murderous assailant awaits outside.  He wants in.  They want out.  Simple, yes, but not without potential.  ATM is so mishandled on the writing level that even the setup to this seemingly easy story is completely botched.  It also becomes clear that these three trapped dolts (Josh Peck, Brian Geraghty and Alice Eve) put together barely have one fully functioning brain.

So anyway, Peck, Geraghty and Eve are three yuppies who leave an office Christmas party mostly because Geraghty has the hots for Eve and wants to give her a ride home after dropping off Peck.  Instead, they decide to go out and need some cash and, since they are in a thriving metropolis, they have tons of trouble finding an ATM.  But they do!  And wouldn't you know it, it's located in a dark, desolate, empty parking lot.  Now, we see that there aren't any other cars anywhere near the ATM and it's already been established that it's Christmas time and it's freakin' cold outside, so it would be entirely logical for them just pull up to the ATM, dash out of the car, get their money, and dash back in the car.  That's what you'd do, right?  Oh, but not them.  For no good reason (other than that's what it says in the screenplay) they park, oh, a couple hundred feet away.

No prizes for guessing that once they've entered the ATM they see a hooded figure standing out in the parking lot, and even then it doesn't dawn on them that something is amiss until this figure beats to death a homeless man who has the misfortune of staggering too closely.  The rest of the movie has this killer trying to get inside the ATM while our 'heroes' do what they can to keep him out and find a way to escape.  So, who is this madman?  No idea.  What does he want?  Also, no idea, although the end credits makes him appear to be just a garden variety bank robber with a particularly violent streak.

Anyway, after many long, long minutes have ticked by where the killer cuts off the heat inside the ATM, clotheslines Peck (and then stabs him afterwards) with an invisible wire he somehow has managed to string across the parking lot without anyone noticing, and then flooding the ATM with cold water as Geraghty hoists Eve on his shoulders to find a way out through the ceiling, during which Geraghty drops Eve, killing her in the process, the movie finally, mercifully, ends, without a resolution.

ATM is one of those movies that just lays there, lifeless.   It contains no suspense, no originality, and no reason for existing.  The studio obviously realized there would be no audience interested in paying full movie-ticket prices to see it.  Just based on the time wasted watching feels like the biggest ripoff ever.