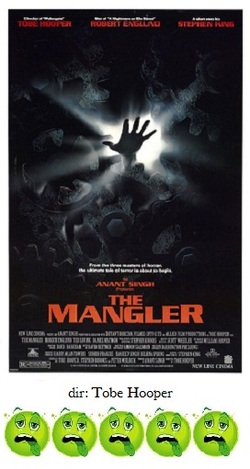 This film had quite the pedigree: Based on a short story from Stephen King, directed by Tobe Hooper (The Texas Chainsaw Massacre) and starring Robert Englund (Freddie Krueger of A Nightmare on Elm Street). One would be led to assume that this movie would kick ass right? Wrong Wrong Wrong.

As a short story, "The Mangler" is easily one of King's scariest; however, reading about a possessed laundry steam press and watching said steam press come to life on screen are two quite different experiences entirely. It just doesn't work. But that's not the only problem.

Robert Englund is the evil owner of the laundry company who has the ancient steam press that periodically sucks workers into its bowels, turning them into bloody cubes. No problem, work just continues. You'd figure after the second or third death the rest of the employees would quit or go on strike or something. But no. Ted Levine stars as the local sheriff who is called in to investigate the deaths and solve the mystery.  Anyway, Levine discovers the steam press became possessed when a virgin cut her hand into its gears, and causing it to come to life. And Englund wants to make his niece the next human sacrifice to fully unleash the evil.

This is just all so stupid, and I don't think there was any way to make it work. All involved obviously thought so, too, so the film is entrenched in a bizarre set design which can't decide if it's modern or gothic.  There is a strange underground labyrinth underneath the laundry itself that doesn't seem to have much of a purpose except to provide a neat-o place to stage the grand finale.

Oh did I mention there is also a possessed refrigerator ? Director Tobe Hooper has absolutely no grasp on pace in this flick; everything moves too slowly.  I suppose the rule of thumb was, if you don't have much of a story you better punch up the action so, maybe,  the audience won't notice. But notice it you will. Every painfully dull and stupid moment. With The Mangler, Hooper has pretty much consigned himself to the heap of once-great, has-been directors along with William Friedkin and Peter Bogdonovich.

Stephen King movies are a funny thing. For every one that is great (Carrie, The Dead Zone) there are half a dozen that are crap (Children of the Corn, Sleepwalkers, Graveyard Shift etc.) It seems weird that his work is so hard to make into excellent films.  If you are tempted to watch The Mangler, just shake it off and watch The Shining or Christine again instead.