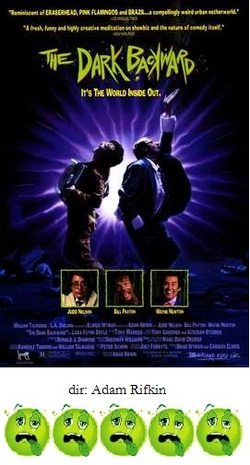 In 1991, three totally off-the-wall flicks premiered (and died) with aspirations of being embraced as instant cult favorites: Shakes the Clown, Rubin and Ed, and The Dark Backward. What the filmmakers forgot was the golden rule which states that you don't set out to make a cult movie on purpose; this guarantees complete failure.  It is something that just evolves afterwards. Otherwise, you just have a steaming pile of flaked out weirdness that tries way too hard.

To say that Bobcat Goldthwaite's writing and directing debut, Shakes the Clown, comes off looking the best of the three should tell you all you need to know about Rubin and Ed, and the bottom of the barrel The Dark Backward.

The Dark Backward, written and directed by Adam Rifkin, takes place in the future, I guess. Landscapes looked bombed out, piles of garbage and refuse are strewn over every inch of space, and the buildings look like undemolished sets from Brazil. The "story", as I loosely put it, deals with the profoundly unfunny, would-be standup comic Marty Malt, played by an embarrased looking Judd Nelson. You see, this guy is a total, dictionary-definition geek. He wears a rumpled suit wherever he goes, has coke-bottle-bottom glasses and a complexion that looks like he moisturizes with lard.

Well, he wants to be a comic in the worst way...but he ain't funny. Not even a little bit. One joke of his goes something like this: "One day I went to the post-office and I asked the clerk for a stamp. Suddenly this giant foot came out of the ceiling and stepped on my head." Ba-da-bomp.

But one day, a curious thing happens. Judd wakes up and he discovers that he now has a third arm growing out of his back....could this be his ticket to superstardom?

Now that I have explained the setup to this putrid little gem, does it sound like entertainment to you? We have a dismal looking future, an unpleasant and unlikable "hero" and worst of all, no point. Nelson's character is such and anti-hero that he makes Robert DeNiro's Rupert Pupkin seem like a guy you'd love to hang with. And then of course there is the question of the third arm. Why does he have a third arm? We never know. But once he gets on stage, he becomes a huge celebrity. Granted, the jokes don't get any better. In fact, his routine is summed up as: tell the same bad joke in the same dreary monotone and then turn around in a circle to show the audience the third arm. Now, that's a recipe for instant success.

What's the point? Non,e really, it's just an exercise in excessive ugliness. There are supporting characters that consist of best pal Bill Paxton, who plays his lusty redneck shtick to the hilt, complete with a scene involving sex with several obese women and various foodstuffs and constantly swilling cans of 'Pork Soda'. There are also cameos by Rob Lowe, as a slimy agent with hideous Bugs Bunny teeth, James Caan as Doctor Scurvy who may or may not chop off Nelson's third arm, and Wayne Newton as Jackie Chrome, a vegas showman (big stretch).

"The Dark Backward" is just a wretched mess from the word "go". Even scenes like having a child peeing on a hungover Bobcat Goldthwaite's face after a one-night stand with Florence Henderson, from Shakes the Clown, or watching Crispin Glover drink the accumulated sweat squeezed out from his odor-eaters in Rubin and Ed can't quite compare to frame after frame of grime, sweat, trash, bodily excretions and the like, that permeate The Dark Backward.

There is only one John Waters who can get away with such things. Adam Rifkin should have realized that.