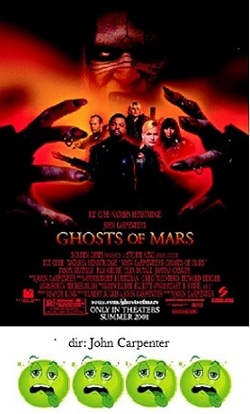 After 1998's lame John Carpenter's Vampires, Carpenter desperately needed a hit in order to restore his waning reputation.  John Carpenter's Ghosts of Mars was not it.  In fact, it was such a  huge step backwards that his career has been almost non-existent ever since.

The inherent idea behind John Carpenter's Ghosts of Mars isn't necessarily a bad one, it's just that it's so sloppily realized.  We arrive on Mars, naturally, where policewoman Natasha Henstridge is giving testimony to a government counsel about a disaster she was involved in at a Martian mining outpost.  She and a group of other officers (they include Pam Grier, Clea Duvall, and Jason Statham) were sent to there to transfer notorious criminal Ice Cube, but when they arrived there they found a large number of headless corpses and several citizens, along with Mr. Cube, in the local jail.  What happened here?

The initial feelings of mystery and dread are quite palpable in these early passages and we are set up to be amazed and thrilled.  Well, it all goes downhill mighty fast.  You see, the rest of the population has been transformed into bloodthirsty savages who go around lopping off people's heads and dabbling in some extreme body modifications.  As explained by scientist Joanna Cassidy (the only cast member who tries to rise above the material), the mining operation unleashed some spirits...or something...and they are possessing the human interlopers.  So, I kid you not, the entire last hour of the movie is just one long, endless, fight scene, where our heroes battle the savage hordes in some of the most monotonously staged bouts of gunfire and fisticuffs.   The first few minutes of this is effective, but soon thereafter the viewers' eyes just glaze over and it becomes apparent that one could take several potty breaks without really missing anything.

Most infuriating of all is the lack of logic involved with these "ghosts."  How many of them are there?  Why are only certain people possessed?  How do they get possessed?  Why were the people locked in the jail safe from possession?  Carpenter uses a "ghost cam" shot to show us a spirit leaving the body of a recently killed possessee and searching out a new host; since our heroes slaughter dozens of them, one would think they would just then just possess them.  But, I guess, the movie would just be over if that were the case.  Even more idiotic is the moment where Henstridge herself is possessed only to...not be possessed shortly thereafter for no real reason other than the script needs it to be so.

It's true this material doesn't exactly beg for great acting talent, but when your main characters are played by Henstridge and Ice Cube there will be more wood than the Sequoia National Forest.  As mentioned before, Cassidy is the only actor to try and give a real performance, but there just isn't enough of her.  Pam Grier would've been a much better choice in the main role, but instead she is given little to do until her decapitated head is shoved onto a pike.

John Carpenter's Ghosts of Mars was a critical and commercial dud, losing $20 million of its already meager $28 million budget.  After this, little has been heard from Carpenter.  He finally got back to directing a feature film with 2010's The Ward (unseen by me), but apparently that one was so underwhelming it didn't even manage to get a U.S. theatrical release, being consigned to home video and on-demand.  Here's hoping Carpenter (the man behind such immortal films as Halloween, The Thing, The Fog, and ﻿Escape ﻿from New York)  gets back to his roots and thrills us all once again