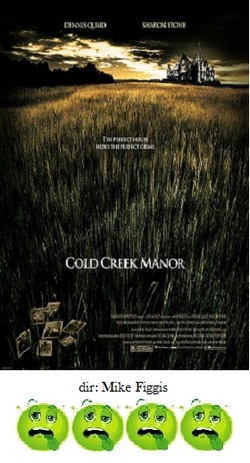 The ads and trailers for Cold Creek Manor made it look some sort of supernatural horror movie.  You know, the old story of a happy family moving into a creepy manse only to be terrorized by bumps in the night, disembodied voices and ghosts.  Instead, Cold Creek Manor is a very tired thriller in the same vein as all of those bad Fatal Attraction knock-offs (The Crush, The Temp, Unlawful Entry, etc.).

Yes, there is a happy family: Dennis Quaid, Sharon Stone and their children, Ryan Wilson and a younger Kristen Stewart, and there is a creepy manse known as, you guessed it, Cold Creek Manor, but there isn't anything scary about the house.  Enter reliably bad Stephen Dorff who is hired by the family to help with renovations and landscaping.  Come to find out, the house has been in Dorff's family for over a century, but was sold off for financial reasons leaving Dorff without a legacy or a home...And he wants it back!

So, essentially, Cold Creek Manor is about the "Gardener from Hell".  After he's fired, Dorff, naturally, goes bonkers and begins tormenting the family.  At first it's just innocuous threats but it escalates (but not quickly) until he's doing such seemingly unlikely things like killing Stewart's horse and then dumping it in the pool.

The film reaches its tiresome conclusion with a very protracted set of fight scenes (all during a thunderstorm, of course) with Dorff trying to kill Quaid and Stone.  Fortunately for the couple, Dorff isn't exactly a brain-child, because he has countless chances to kill them but he...well...doesn't.  One scene in particular involves Dorff pushing Stone down a well, and while Quaid is leaning precariously over the edge of the well looking down at Stone, all Dorff needs to do is gently tap him in, too.  The end.  But he doesn't, because the finale must take place on the mansion's rooftops so Dorff can die in spectacular fashion by falling to his death.

Cold Creek Manor's biggest sin is the fact that it's so painfully boring.  We, as viewers, are so far ahead of the story, that it becomes an endurance test waiting and waiting and waiting for the characters to catch up.  Plus, Dorff is so obviously a nutjob, Quaid and Stone should've had warning lights blinking in their brains immediately.

Ultimately, Cold Creek Manor is unoriginal, uninspired, and just plain useless.  There's nothing here that anyone wants or needs to ever bother with.