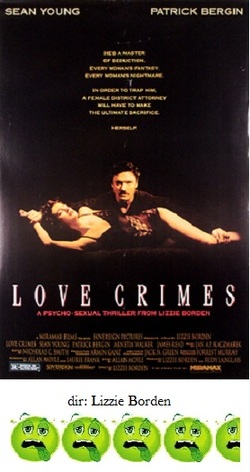 The thoroughly un-erotic Love Crimes is so bewilderingly odd and lame that one has to wonder why anyone thought it needed to be made.  It's laughably inane in so many different ways you almost feel sorry for it.

Love Crimes stars dependably bad Sean Young, in an unfortunate haircut, as a district attorney who becomes obsessed over arresting oily Patrick Bergin.  His crime?  He lied to a bunch of women by claiming to be a photographer for Vogue and took pictures of them naked.  Since none of the women want to press charges, and some of them don't even think anything weird has happened, it's a mystery how a district attorney has the time or resources to go after something so flimsy.

Well, Young finds out where Bergin lives, but he gets the drop on her and locks her in a closet which causes her to have gauzy flashbacks of being locked in a closet by...someone....although it's not clear.  Her dad?  Her mom's boyfriend?  Who knows?  So now we watch the film devolve into a ludicrous quasi-master/slave relationship where Bergin does horrible things like taking Young fishing, until Young finally cracks and screeches about never having orgasms and ripping up her shirt in angst.  Sure, at one point Young gets hold of a knife and tries to stab Bergin.  His response?  He throws her over his lap and spanks her and then gives her a bath.  At this point, it is the film's only attempt at an erotic sex scene, but unfortunately it's all a fantasy in Young's head so it doesn't count.  Bergin's such an obvious nut-job that you wonder how so many women got duped by him, even when he does such charming things like singing a song with the lyric, "all the girls love you when you yodel in the valley."

Where does all of this lead?  After Young finally escapes, she goes back to her home.  Bergin, naturally, breaks in because he becomes obsessed with her for some reason.  Even when he tries to seduce another woman by telling her to run around her room topless while whinnying like a horse, he can't seem to get aroused any longer.  Bergin then terrorizes Young by taking her picture until she bashes him over the head with a glass bowl.  The end.

Love Crimes is such a ludicrous mess that it's hard to believe it even exists.  Director Lizzie Borden had made a name for herself with the 1986 indy hit Working Girls, and Love Crimes was her big studio debut, and its disastrous failure pretty much ended her career.  The script by Allan Moyle and Laurie Frank and the performances by Young and Bergin should also shoulder the blame.